Tauranga will have a new cultural icon after a local hapu purchased a giant plastic waka.

"Awesome. I mean it's a really good kaupapa. Really happy. The more that we can Māori up our localities and our environments, that's all good." 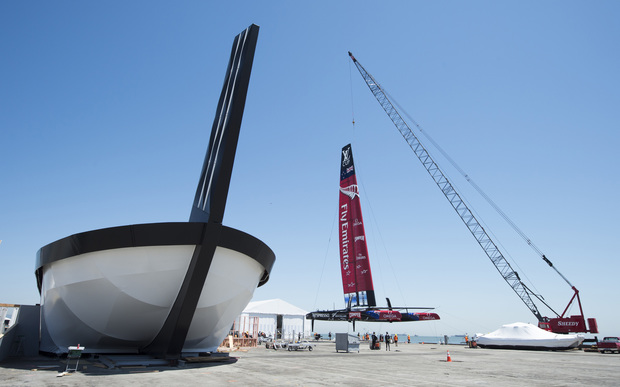 The 80m fibreglass waka, which was built for the 2011 Rugby World Cup, was bought from Auckland iwi Ngati Whatua ki Orakei.

Waka Māori, which acts as a pavillion, had a controversial start, becoming the political football of the 2011 Rugby World Cup after $1.9m in tax payer funds was sunk into it.

But after the rough start, it ended up successfully promoting Māori Rugby, trade and culture from its prime position anchored on Te Wero Island at Auckland's Viaduct.

Ngāti Whātua Ki Ōrākei Whai Maia's CEO Tupara Morrison said it didn't end there, with the waka garnering plenty of attention at the Emirates Team New Zealand base in San Francisco, where is has been for the past four years.

But Mr Morrison said it was time to pass it to another group to enjoy.

Ngā Pōtiki hapu hasn't announced how the waka will be used but local Iwi member Te Awanuiarangi Black is still excited about its imminent arrival.

"I think it's important for Tauranga to establish its own Maori identity.

"We have all of these cruise ships, we have a lot of people that come, but there's nothing really to see where Maori are in the mix. I think something like this might just give that bit of an outlet.

While a giant waka on Tauranga's seascape might not appeal to everyone, Mr Black said the waka had the potential to set the city apart from others.

"Once we've got that and people start to see, 'Oh wow, you know, this Maori stuff isn't too bad' - then we're on to the winning straight."

The waka was dubbed Tuppawaka or Plastic waka by former MP Shane Jones but Mr Morrison said it was crafted from quality award-winning materials, giving it a lifespan of about 20 to 25 years

"It's 82m long, and it's crafted from laminated timber and it's covered with this white membrane skim.

"It actually won the 2012 Industrial Fabric Association's international award for excellence at their expo, in Boston."

Waka Māori is currently on its way home from San Francisco.

Mr Morrison said when it arrived home it would be prepared for a significant ceremony where its mauri, or lifeforce, will be passed over.

"When it went to San Francisco, we sent a delegation of our kaumatua with it.

"When the waka arrives back in New Zealand, our kaumatua will give the blessing for the waka to move on, and we'll do that in conjunction with the local mana whenua."

Mr Black said the two iwi had a long history and the waka would be another connection.

"It's not about buying a canoe. It's about us connecting again as whanau, that hopefully our mokopuna there know that all of those are there, because this is our way of retaining and maintaining that whanangatanga into the future."

No one would say how much Waka Māori was bought for but it cost about $2 million to make and run, of which the tax payer paid $1.9m.

Other government investments at the time it was built were the World Cup Cloud and the Giant Football which cost $14.6m combined.