The market appears to be talking in Wellington, where the value of buildings labelled with an earthquake-prone 'yellow sticker' has dropped by 45 percent.

Researchers who studied the effects of the stickers on a building's value said, since the Canterbury quakes, buyers were much more interested in how safe a building was and the potential cost of strengthening it. 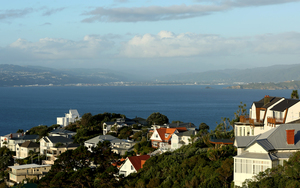 The view towards the Hutt Valley from the Wellington suburb of Roseneath. Photo: RNZ / Alexander Robertson

The streets of Wellington house 703 buildings on the council's list of quake-prone buildings and once one is on the list, its owners are legally bound to strengthen or demolish it within 10 to 20 years.

Dr Arthur Grimes is a senior fellow at Motu, the economic consultancy that did the research.

He said the potential cost of having to strengthen was making buyers more cautious about how much they would be willing to pay.

He believed some businesses were not willing to be liable for the death or injury of workers in unsafe buildings if there was a major quake.

"We have heard anecdotally that a number of corporates won't put their staff into buildings that are earthquake prone, and therefore one assumes that as a result the rent that the owners could get would drop."

Ian Harrison is a spokesperson for Evidence Based Seismic Strengthening, a group which opposes the use of the sticker rating system.

He said the actual risk on the yellow-stickered building was very low and stigma associated with being labelled with one was unfair.

"You're much safer being in those buildings than being in a plane and a lot safer than driving a car, so just because they've been stickered doesn't mean they are unsafe."

"But I have an enormous amount of sympathy for building owners that are now in this position who have seen some drops in value after Christchurch because in some cases they were intending to strengthen anyway.

The council offered some grants to help heritage building owners with costs, but she wanted central government to step up and do more to help, she said.