A gang leader is putting out a call to Mongrel Mob and Black Power members around the country and in jail to keep the peace, after a car crash killed three Mongrel Mob members. 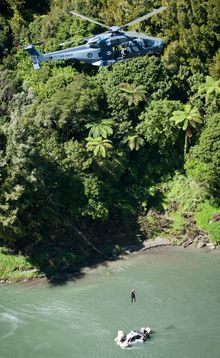 The three men - and another man, who was injured - were on their way to the gang's 50th anniversary celebrations in Hastings on Saturday when their car fell about 150m into the Mohaka River near Wairoa in northern Hawke's Bay.

Police are investigating if the men's car was run off the road and there are fears of retaliation.

While things were calm in Wairoa, he had heard of a few small gang clashes in other regions.

"The tension in Wairoa is OK, but there are factions around the country and the news has come back to us that little incidents have started to happen, just little clashes between the two groups."

He said people needed to keep calm and allow things to be sorted out.

The police officer investigating the crash, Detective Senior Sergeant Brent Greville, said he was not aware of any gang tensions resulting from it.