Otago University has confirmed 98 completed exam scripts were stolen from its examinations office during a burglary on Saturday night. 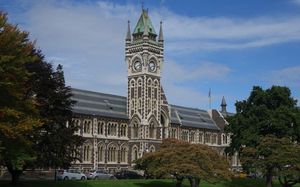 There has been a break-in at Otago University. Photo: RNZ / Ian Telfer

Most of the students affected by the theft had sat exams earlier in the day and their scripts had not been marked.

The office, which is located in the Clocktower Building, is secured with electronic swipe-card access.

There was significant damage to the office's windows and doors, police said.

Prof Squire said they would be upset and disappointed that the considerable effort they had put into study and exams had essentially been destroyed by a criminal act.

The stolen papers covered a range of subjects, from dentistry and politics to English and sports medicine.

The university hoped the scripts would be returned but plans were being made in the likelihood they would not.

Affected students were being contacted and, while some had already re-sat their exams, no one would be forced to do so.

The university wanted "to give them the option of either going for the examination or going for internal assessment", he said.

The police spent eight hours forensically testing the scene on Sunday and were still trying to find the thieves, Prof Squire said.

Anyone with information about the theft should contact the police as soon as possible.