The Department of Conservation (DoC) is acknowledging that the state of the Northland's native forests is serious. 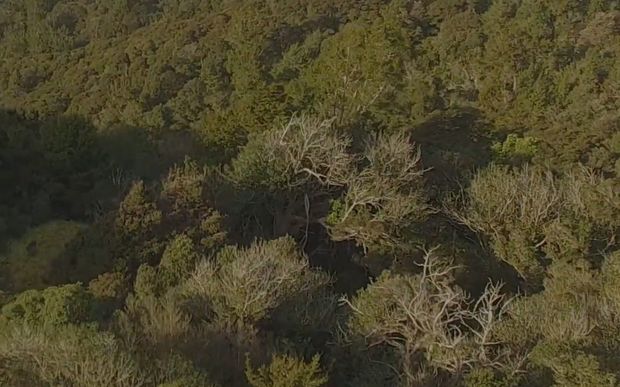 A screenshot from the drone footage, which Forest and Bird says shows forests almost too damaged to save. Photo: Supplied

Last week, Forest and Bird released drone footage of forests in Russell, Otangaroa and Whangaroa, which it said showed trees dying of neglect.

The forests are dying because of rampant possum damage and it is almost too late to save them, the organisation said.

"The reality that's happening in our forests - we are in a battle to save our forests from possums, rats, stoats and coats, feral cats. It's a really serious situation," she told RNZ's Sunday Morning programme.

Ms Smith said DoC was already working with local conservationists on pest control operations and planning for future work was under way.

Forest and Bird has said the same problem is taking place around the country in areas where DoC and regional councils have not been carrying out sustained pest control programmes.