Wallabies caught offside in the Bay of Plenty will be eradicated by the local council, it warns.

Bay of Plenty Regional Council is urging people in the area to report sightings of the fury pest west of Rotorua, east of Kawerau, or south of Rainbow Mountain.

It wanted to stop the population growing any further and spreading into other areas, where they can do more damage.

Council's land management officer Dale Williams said wallabies were a pest both in the environment and in the world of rugby.

"I guess we're taking advantage of the Wallabies vs All Blacks game at the weekend and what were asking people to do is report wallaby sightings to us." 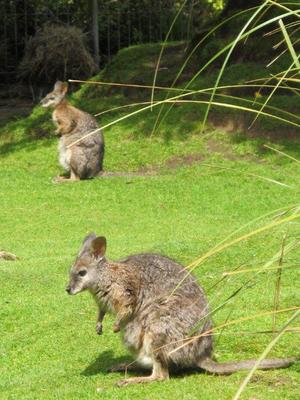 "Wallabies feed on seedlings, altering the species composition and ultimately depriving native birds and animals of food and shelter."

The reminder came after recent wallaby sightings near Whakatane and Tauranga.

"We know where they exist and roughly how long they've been there. They were liberated in 1912 [near Rotorua] and they've basically spread out from that point ever since," he said.

"Our main aim is to stop the distribution expanding any further so we need that information from the public when they see them in new areas."

Wallaby sightings could be reported by calling 0800 STOP PESTS.