Christchurch residents are preparing to fight the Earthquake Commission over substandard repairs to their homes. 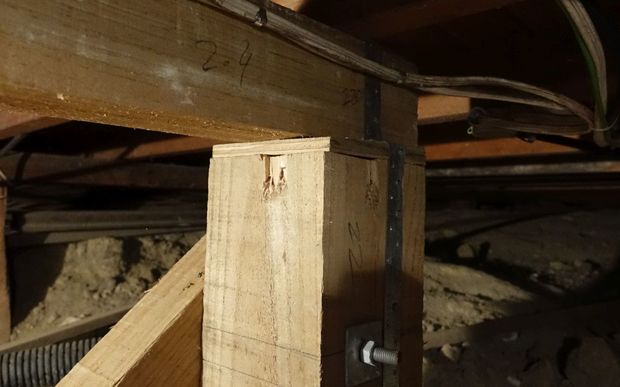 The foundations of a Christchurch home, which have to be repaired for a second time. Photo: RNZ / Conan Young

About 60 people attended a meeting in Christchurch last night to discuss their concerns about the quality of their repairs and to find out what they can do about it.

Christchurch lawyer John Goddard said the residential rebuild in Canterbury had entered the "accountability phase" and said some homeowners who thought their repairs were finished might have to go back to square one.

Mr Goddard, who provides free advice on earthquake issues, outlined the findings of a Ministry of Business, Innovation and Employment (MBIE) report into some structural repairs, that were exempt from a building consent.

The report found more than a third of homes surveyed did not meet the Building Code, and most non-compliant cases involved a method known as a 'jack and pack', which involves packing material between the floor and foundations to re-level houses.

Fendalton homeowner Erin Stack is locked in a two-year dispute with EQC over what she says is a botched repair job to her home, which included a jack and pack.

"My floor levels are spongy, they're all out of line... I've got lines in the new carpet and floor movement, so it's failed," she said.

A load-bearing structural wall had cracks in it and was supporting half a storey above it, something of "huge concern" to Ms Stack.

"I'm actually very disappointed that the integrity of the work that we were promised from day one has not come to anything and that we're left in these shambles with no positive answers."

EQC said it would review about 3600 properties as a result of the findings, meaning some homeowners would face a second round of repairs.

Mr Goddard said homeowners had legal rights to ensure work done to their homes was up to scratch and told residents to gather information about their EQC claim.

"To use the MBIE guidelines appropriately the bottom line is that there needs to be a site-specific assessment and engineering judgement in order to assess earthquake damage and come up with an appropriate repair strategy."

He asked for a show of hands from the audience in response to two questions: has structural work been carried out without geotechnical drilling and engineering reports and was an engineer on site when the work was done?

Most residents in the room raised their hands.

Mr Goddard said house insurance would not be reinstated if building work did not comply with the building code and said a property's value could drop if substandard repairs were not fixed.

He urged the Christchurch City Council to get involved and inspect properties repaired by EQC and issue Certificates of Acceptance.

EQC's head of Canterbury dwelling settlements Michael Price said since the release of MBIE's report about 150 people had contacted the call centre to question the standard of their repairs.

He said from now on repairs involving floor re-levelling would require a site meeting between the licensed building practitioner, contract supervisor, engineer and homeowner, before work started.