The cost of all day parking at Auckland's council-owned parking buildings is to rise by 40 percent, and some evening rates by 50 percent. 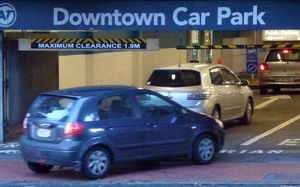 From next month, it will cost $24 to park all day at the council's three central city buildings at Downtown, the Civic and Victoria Street.

The city's transport agency said the removal of an early-bird discount, last December, had failed to cut the number of commuters choosing to drive into the city and park all day.

It will also boost the evening flat rate in the Civic Car Park from $8 to $12, and by a smaller amount at the other two buildings.

Some Aucklanders who use the council's inner city carpark said they would be able to afford the 40 percent rise in the cost of all-day parking.

Auckland Transport is hoping to discourage people from driving during one of the busiest times in the morning.

Peter Fielding lives in Taupaki, near Kumeu, and said there was not regular public transport, which meant he would have to find an alternative to using the Civic Car Park.

"I do have to come in here quite regularly. If I'm in here four or five times a week, and sometimes I'm at meetings for a number of hours that's going to really affect, on a weekly basis, the budget."