A Taranaki mental health advocate says new funding criteria are ripping the heart out of services for provincial New Zealanders. 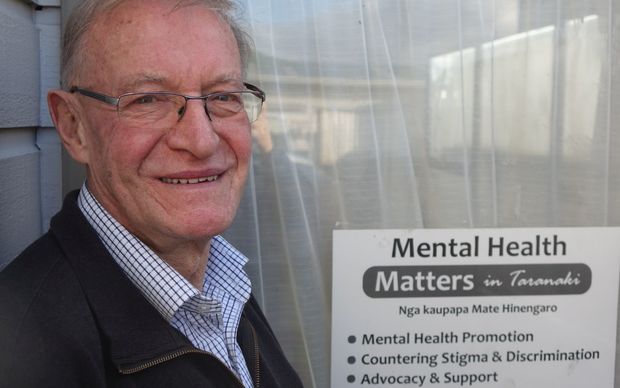 Gordon Hudson has set up a voluntary organisation to fill the gap left by Like Minds Taranaki's closure. Photo: RNZ / Robin Martin

Gordon Hudson is a former manager of Like Minds Taranaki, which closed its doors last Friday.

He said the Ministry of Health was abdicating its responsibility for mental health promotion and leaving it to volunteer agencies to pick up the slack.

The Ministry of Health subsidiary, the Health Promotion Agency, cut Like Minds Taranaki's $127,000 annual funding last December, but Mr Hudson said it had not put in place any alternative services.

He said it did this despite Like Minds having an excellent reputation and more than 15 years' experience in the sector.

"There seems to be a change for change sake thinking going on and it is working against people living in rural communities.

"This is not a good thing for rural communities anywhere in New Zealand," he said.

"We need the services, we need to maintain them, to nurture them, support them and this Government is certainly not doing that."

Mr Hudson set up a volunteer organisation, Mental Health Matters in Taranaki, to fill the void, but said it would be limited in what it could achieve.

"We will never as a volunteer organisation be able to provide the service that a contracted organisation, a paid for organisation, like Like Minds was in Taranaki was able to do so there'll just be one less service in an already very vulnerable sector."

Urenui farmer Linda White and her husband John have been using Like Minds' services for about eight years after he had his first acute episode of depression.

Ms White said the service had been a godsend.

"I could just call in, have a cup of tea, talk to people who knew what I was going through ... and actually just sit down face to face with someone so for me it was a big thing."

Ms White said she could not believe that such an important service for rural people had been forced to close down.

"The avenues of stigma, discrimination and all of these things that we're still facing still.

"There's no obvious place for people to go to and there's no advocacy now for that and the Government and the DHB are not being drawn to that problem.

"They're just sweeping it under the carpet."

HPA Mental Health manager Virginia MacEwan said a new national plan had been developed for the Like Minds Like Mine programme.

Ms MacEwan said the programme's funding was restricted to $1.2 million a year and included a new model that moved away from regional providers to local, community projects.

"The Health Promotion Agency (HPA) ran an open competitive procurement process to find the best projects that partner with their local community. Some 16 projects were selected across New Zealand. Project activity began in January 2015."

Ms MacEwan said none of those 16 projects were in Taranaki.

The projects chosen worked to reduce stigma and discrimination and increase social inclusion for Māori, Pacific people, young people aged between 17 and 24, and those with severe mental illness, she said.

Other social services taking a hit

Like Minds was not the only social service to have taken a hit in Taranaki recently.

New Waves, a one-stop shop for youth services, and the local offices of Relationship Services Aotearoa, have closed.

"The reality was that we were unable to attract sufficient long-term sustainable funding, so I guess a signal from us would be that it is considerably harder these days than it was even a few years ago to raise public subscription and community funding for organisations like the New Waves project."

Mr Handley said it was difficult to know what the future held for the young people who had used New Waves.

"Many of the service providers who were present at the New Waves project are still prepared to offer that service, it just won't go on in a kind of a centralised place.

"So while the services will remain, whether it will continue to receive the same level of interest from the young people remains to be seen," he said.