Three of the government's so-called anchor projects for Christchurch have had their completion dates pushed back.

A new 50-metre swimming pool and indoor courts known as the Metro Sports Facility will now not be completed until 2020, two years later than planned. 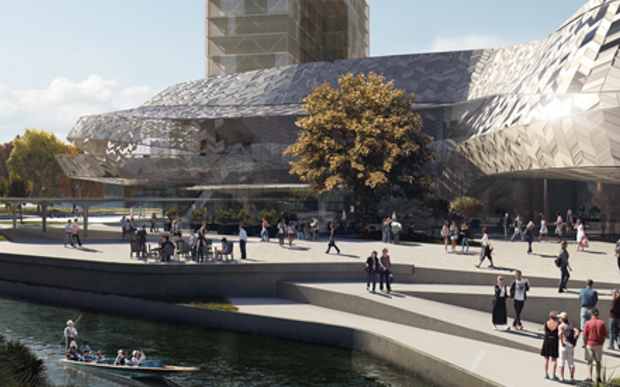 A concept image for the Convention Centre Precinct on CCDU's website. Photo: CCDU

The new convention centre will take 18 months longer than planned to complete and will not be opened until the end of 2018.

The new timeframes appear on the Christchurch Central Development Unit's website, with no explanation for why they have changed.

A third project, the $20 million Margaret Mahy playground, won't be completed until the end of this year, having earlier been promised for the middle of the year.

The CCDU said it would soon begin removing small amounts of hazardous material found on the site.

A whole generation missing out

A head of school sports in Christchurch says news the Metro Sports Facility is being delayed until 2020 means a whole generation is going to miss out on opportunities teenagers elsewhere take for granted.

Head of School Sport Canterbury Bill Grogan said not having a large enough pool meant parents have not been able to attend swim meets because of a lack of space.

He said the city had missed out on hosting national tournaments because it does not have a big indoor arena.