One of Hollywood's greatest screen musicals, which starred Gene Kelly and Debbie Reynolds, has its gala opening tonight in Wellington.

The West End stage production Singin' In The Rain comes from the producers of Jersey Boys, The Sound of Music and Annie.

A love story set in 1929, around the time silent movies were about to burst into sound, Singin' In The Rain is the tale of actor Don Lockwood and his silver screen beauty, Lina Lamont, the power couple of Tinseltown.

But Don Lockwood's love interest in his leading lady is purely for the big screen, even though Lina Lamont is convinced their screen romance is real.

Don, however, is more interested in aspiring actress, Kathy Seldon. Grant Almirall plays the role of Don Lockwood, and said performing in the 'rain' - 12,000 litres of water falling onto the stage - was not as easy as it looked.

"It's an incredible number to do but very trying, because you have to make sure you don't slip on the floor.

"I have slipped over before, and you have to try and give without giving too much away, performing Singin' In The Rain," he said.

So, how is it possible to drench a stage with thousands of litres of water?

Technical director Rich Blacksell has to make it all happen.

"We flood massively from underneath the stage, we have tonnes of water pumping in from underneath, as well as all the rain from the 12 rain heads on stage.

"What we want to do is get it as full of water as quickly as we can, so that you get all the visual drama of the splashes rather than just seeing the rain falling from above.

"We have industrial pumps and piping running around the theatre that drops the water from the rain heads," he said. 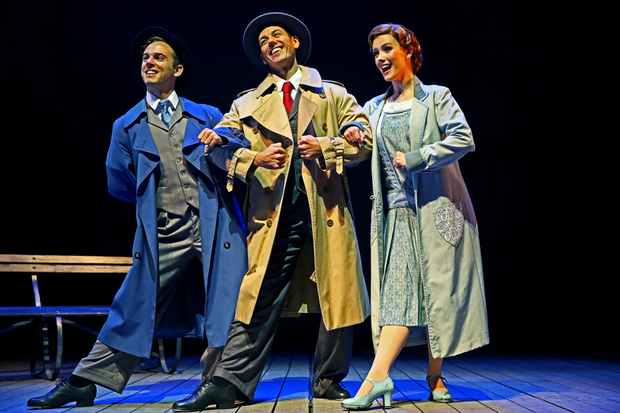 Bethany Dickson played the role of Maria in the recent Sound of Music tour, and takes the role in Singin' In The Rain of Kathy Seldenin, who is wooed by and then falls in love with Don Lockwood.

She said tap dancing in the rain was slippery work, but there were a few tricks to get around that.

"The stage itself is made of a wood that isn't too slippery when dry or wet, but you do still slip, so I put tiny squares of sandpaper tape on the soles of my shoes to give me more grip," she said.

While slick choreography is a massive component of the stage show, associate director Cameron Wenn said dealing with the sound of rain while Don Lockwood sings was a challenge.

"We have waterproof microphones on Don, when he sings the main song, but you can hear the pitter patter of the rain on the umbrella and mixing that sound is quite tricky," he said.

It won't only be only the cast carrying umbrellas as the show has its gala opening night at Wellington's St James Theatre; audience members in the first three rows are supplied with umbrellas and ponchos to keep them dry.

The show goes to Auckland next month.