A 2-metre long blue shark which has been captivating passers-by on Wellington's waterfront has been given a helping hand to freedom.

The female shark swam under a PVC barrier into the area below the high diving platform on Taranaki Wharf, near Te Papa museum this morning, and has been swimming around all day at the surface seemingly unable to find her way out.

The barrier extends only 3 metres into the 8-metre deep area and it was hoped the shark would swim underneath as the tide fell.

Instead, when the shark failed to leave, Wellington City Council contracted Wilson Underwater Services to help her out.

Commercial diver Murray Wilson, who is familiar with sharks after working in Australia removing them live from shark nets, jumped into the water just before 7pm. 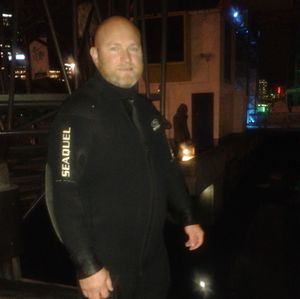 He said he had suggested to the Department of Conservation he could get the shark out - but first they wanted to see if it would leave on its own.

But he said that didn't happen.

"So the next option was to try and scare it out just by jumping in the water, and that didn't work. So that left the final option to wrangle it out - which was to swim above it and hold onto it and actually guide it out."

Department of Conservation spokesperson Amy Brash said the shark appeared to be in good health and had not been in any danger.

NIWA shark scientist Dr Malcolm Francis said he had only ever seen one other blue shark in Wellington Harbour, about 10 years ago. He said he got occasional reports from people who had seen a blue shark in the harbour, but although they're seldom seen he suspected they were more common than we realise. 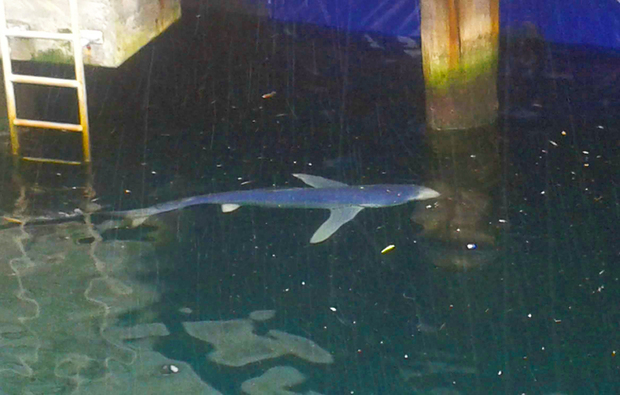 Little blue penguins have also, on occasion, swum under the PVC barrier, become trapped, and needed to be rescued. The barrier is in place to divert water contaminated with faecal coliforms that sometimes flows from a nearby stormwater pipe following rain.

The high diving platform is popular with swimmers on hot days, and although today's cool wet weather was not likely to attract swimmers, the manager of the nearby Café Moana coffee caravan erected a DIY health and safety sign at the base of the dive platform telling people not to swim.

Shark expert Dr Malcolm Francis has dived with blue sharks and says that in the water they are usually curious and docile, and "behave like puppy dogs." However, he notes they can become "can become aggressive and persistent around food" and when this happens they've been known to chase divers out of the water.

Blue sharks are not known for attacking people, except for the well-known occasions during World War Two when survivors from a number of sinking navy ships were attacked by sharks as they floated in the water. 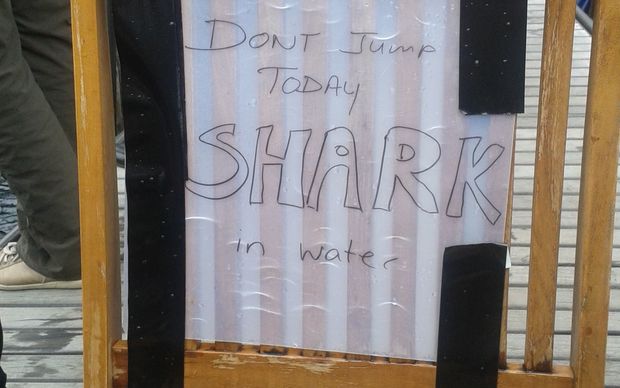 With a shark trapped in the water below, a cafe owner warned people not to jump into Wellington harbour. Photo: RNZ / Alison Ballance 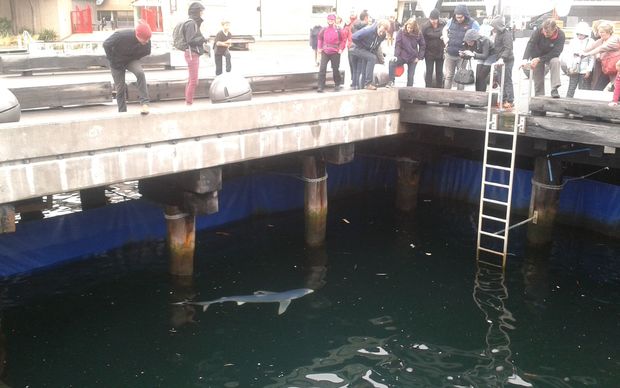 Dr Francis says that blue sharks are found throughout New Zealand's waters, and are often seen in coastal waters during summer. However, as they're a tropical and sub-tropical species they are more common in northern New Zealand.

They are frequent caught as accidental by-catch in tuna longline fisheries.

The largest blue shark officially recorded was 3.83 metres long, and both male and female blue sharks mature when they are 2.2-2.3 metres long, which suggests this female shark is not quite mature.