A second case of measles has the Canterbury District Health Board worried the disease is circulating through the community. 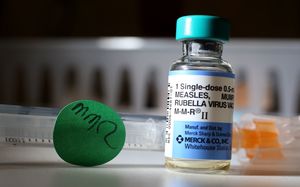 A two-year-old girl from the seaside suburb of Sumner has contracted the highly infectious disease, weeks after a four-year-old was diagnosed.

The Canterbury District Health board reported a four-year-old contracted a mild case of the disease two weeks ago.

That child had also had their first vaccine at 15 months but not the second shot at four years.

Canterbury Medical Officer of Health Cheryl Brunton said they were working on finding the source of the disease in both cases but at this stage they were not linked.

Dr Brunton said the fact the two cases were separate meant measles was circulating through the community.

"At this stage, we can't see any obvious connection between the two cases."

The two Sumner preschools the child attends have notified parents and are asking children who have not been immunised to stay home.

On the preschool's Facebook page, parents were advised to keep all children who had not been immunised away until 1 April.