A protester sitting 25 metres atop a kauri tree in Auckland is confident it will stay another half millenium, despite being under threat of felling. 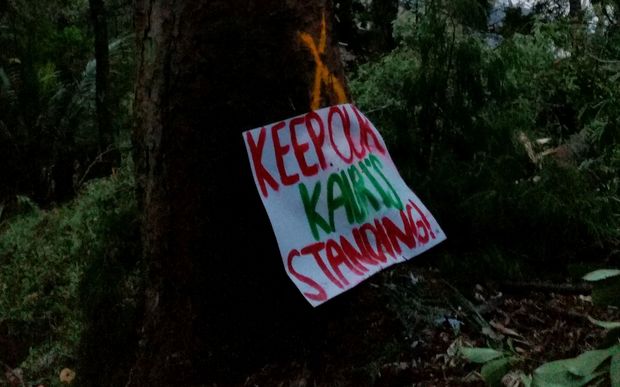 A protest sign on one of the Kauri marked to be cut down. Photo: RNZ / Lauren Baker

Michael Tavares is about to spend his third night secured to the 500-year-old tree in Titirangi in a bid to stop it being cut down to make way for two houses.

Off to sleep now to the sounds of ruru, crickets, weta. Sounds this tree has heard for centuries. Let it never hear chainsaws. #SaveOurKauri

He said he would remain until a decision was made for it to stay.

"I'm just buying time, so that what needs to happen can happen down there on the ground.

"I'm sitting up here, and this tree will live another 500 years, at least."

Mr Tavares said he had received a lot of support to keep the tree standing.

The issue has been referred to the Auckland City Council's development comittee, which will meet tomorrow.