A man occupying a 500-year old kauri tree in Auckland to stop it being cut down has been issued a trespass notice.

The old kauri, as well as a 300-year-old neighbouring rimu, are to be felled in the western suburb of Titirangi to make way for two new homes. 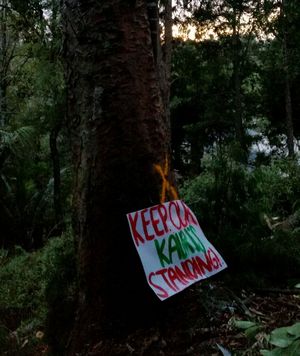 A protest sign on a kauri marked to be cut down. Photo: RNZ / Lauren Baker

About 50 people gathered to save the tree this morning and Michael Tavares is now stationed 25 metres up the kauri, saying he will not come down until both old trees are safe.

The protesters said they feared destroying this tree would set a precedent - both in terms of development, and the future conservation of kauri.

"Their main concern is they've got their [own] health and safety processes that they have to follow, that doesn't include being intrusive to what we're doing now.

"We've got Michael up the tree, Michael is there to stay, and they won't be getting him down because that's not their job.

"They're just interested in being here today to complete their work, now with Michael there, they can't do that."

He remains in the tree though, and the police have left the scene.

Mr Tavares has set up a hammock in the tree, so he can continue occupying it overnight.

Its a beautiful morning here in Titirangi. Get to 40 Paturoa rd to tell council they got it wrong. #saveourkauri pic.twitter.com/URqR9qBFeO

Charlotte Graham, of mana whenua, said it was a disgrace to cut down an apparently healthy kauri.

"Titirangi is known to have kauri dieback in here. To cut down something that is potentially healthy is atrocious.

"Kauri are our taonga, without kauri we lose part of our culture, we lose a part of ourselves."

Auckland Council had allowed the removal of the trees so developers John Lenihan and Jane Greensmith could build two homes.

The council said it was satisfied all measures were being taken to minimise the effects of the tree removal and ecological value of the site.

It said the developers had chosen to build the homes close to the road to minimise the number of trees that need to be removed.

The council said it understood people's concerns but the zoning on these sites allowed for development if environmental effects were considered.