About three quarters of the nearly 200 whales stranded in Golden Bay have been refloated, but are yet to swim out to deeper water after getting stuck on sand. 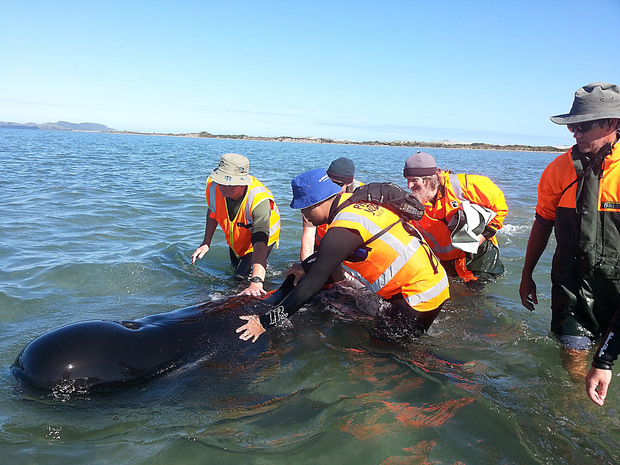 DoC rangers and volunteers re-float a whale at an earlier stranding at Farewell Spit in January. Photo: DOC

Department of Conservation (DoC) staff rushed to the area near Farewell Spit at the top of the South Island to rescue 198 long-finned pilot whales at about midday today, after being alerted by a member of the public.

About 50 whales have since died.

DoC spokesperson Mike Ogle said earlier this afternoon that there were more whales than people so DoC could do with some help from local residents.

Mr Ogle said he was hopeful this afternoon's high tide would result in a successful refloat.

"They're in reasonable condition most of them, their skin is looking pretty good, and there's not that many have died, relatively."