Auckland Council has relaxed its stance on plans by its port company to reclaim part of the Waitemata Harbour.

The two sides of the Bledisloe Terminal (foreground) will be built 98 metres further into the harbour, with the port later hoping to reclaim the space between them. Photo: SUPPLIED / Ports of Auckland

However the detail of the vote taken behind closed doors last night remains confidential.

The council has been reviewing its current position, which would require Ports of Auckland to go through a full resource consent process before its planned reclamation could proceed.

It will take its new stance next month to an Independent Planning Tribunal which will make the final decision as part of the city's Unitary Plan.

The port wants to reclaim a further 135 metres of Waitemata Harbour to give it longer berths and more handling space at the Bledisloe wharf.

Prior to that debate, the port company surprised its council owner and local iwi by getting approval to extend two wharves 100 metres into the harbour.

Ports of Auckland will begin extending Bledisloe Wharf in April, with the city's mayor admitting he had no idea the controversial move was likely.

The two 30-metre wide wharf extensions are effectively the side boundaries of the area which the port hopes eventually to reclaim.

It does not yet have permission to reclaim, but confirmed it has resource consents to extend two wharves in the Bledisloe area.

Ngati Whatua's commercial arm says it is seeking legal advice over whether the consents are valid.

"We were surprised and disappointed to learn that wharf extensions were granted through the resource consenting process, and we question the validity of those consents," said Kate Healy, chief operating officer of Whai Rawa Limited.

"At this stage we haven't had an opportunity to look at those with our legal experts, and we'll be doing that in the next few days."

Ports of Auckland says the extensions are an operational matter and not something it needed to tell its owner about.

Auckland Council says the wharf extensions are allowed under existing planning rules covering the port, without a requirement for public notification, and the decision was made by an independent commissioner.

Mayor Len Brown said he did not know the extensions were being sought, but that it was proper for the council's regulatory role in planning, to be kept seperate from it's other interests in the port.

The council also faces opposition to another contentious development. 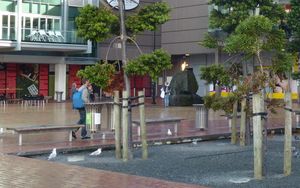 The board representing Maori in Auckland is questioning the legality of the imminent sale by the council of a prime piece of downtown land.

The Independent Maori Statutory Board says Queen Elizabeth Square near the waterfront might not be the council's to sell.

The council could be within a week of doing a deal to sell the square, possibly for tens of millions of dollars, as part of a wider deal with Precinct Properties which is redeveloping the buildings around the square.

The chair of the Maori board, David Taipari, has asked the council to detail the history of the reclaimed site, which was transferred to the council from the former harbour board.

"If this land was acquired from maori interests via the Public Works Act or other legislation, I challenge whether the council has the authority to sell this land, and should make sure it's offered back to its original owners," said Mr Taipari.

The council says there are no Treaty issues regarding the land, and Ngati Whatua says it's not aware of any entitlement to the site, but it would be interested if any arise.