A proposal to dredge Wellington Harbour to accomodate larger ships is being met with surprise. 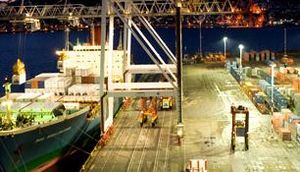 CentrePort currently handles about 100,000 containers a year compared with the nearly 970,000 by Ports of Auckland in the year ended June last year.

CentrePort chief executive Blair O'Keefe said the dredging was necessary to accommodate cargo ships which are getting larger worldwide.

He said it will also help the region to remain competitive in the long term.

The project is expected to cost between $20-40 million.

Not a big player

Transport planning and economics consultant Richard Paling said the plan is surprising as Wellington is not a major port.

"CentrePort is quite a long way removed from the main producing areas in New Zealand, and getting goods to CentrePort would impose costs which, on the basis of the Ministry of Transport's work, would seem to be greater than the savings you might get in cheaper international shipping," he said.

Mr Paling said the savings of using larger ships would be more than outweighed by the increased costs of road and rail.

He also said the plan was surprising because Wellington was not as well placed to support growth compared to Auckland, Tauranga, or Lyttelton ports.

"Wellington is a bit out on a limb, and it's quite surprising that they are trying to invest to attract larger volumes of freight to them. But, if you're a port, this is really what you're all about."

"I can't comment on how they see the case stacking up, but it seems to be very speculative. It's very much going against the grain of what's happening in New Zealand. It's not to say it's wrong, but it's very risky."

A study published by the Government last year, the Future Freight Scenarios Study analysed the impact large container ships would have on New Zealand's freight costs.

It found that large container ships, which would visit fewer ports, would increase the overall cost of freight in New Zealand.

"Overall, we found that the potential benefits that New Zealand gains from the use of larger international container ships are outweighed by the increased port costs, domestic freight transport costs, and capital costs on the road, rail and coastal shipping networks," it said.

CentrePort will be starting consultation with iwi, stakeholders and interested parties before applying for resource consents about mid-2015, and is welcoming community feedback at the Port Open Day on 14 February.