The government intends to create a new, independent redress system for survivors of abuse in state care and faith-based institutions.

Its exact design is yet to be decided, but will be developed in collaboration with survivors, Māori, Pacific peoples and disabled people.

It comes as the government publicly releases the Royal Commission of Inquiry into Historical Abuse in Care's interim report into redress.

It found survivors' requests for redress were often rejected or their abuse downplayed, disbelieved or dismissed.

The inquiry also concluded the agencies and institutions responsible for the abuse refused to believe there was a systemic problem and feared the potential cost of opening the floodgates and settling with an unknown number of claimants.

It also noted current redress systems at government agencies and faith-based institutions are "completely inadequate in many ways".

The inquiry has made 95 recommendations, including the creation of a new redress process and a public apology to survivors.

Public Service Minister Chris Hipkins said the government had listened and acknowledged there have been failings in the Crown's approach to providing redress.

"This is a national disgrace that it has taken as long as it has to get to this point, that is something the whole country should be sorry for and that we should all regret.

"Their voices have now been heard and one of the key messages that has come out of hearing their voices is that they want a redress system that's meaningful and that they can have trust and confidence in. They haven't had that up until now and so it is really important that in the next steps we get this right this time."

Discussions about how the design process could work will begin early next year and more detail will be shared from that point, Hipkins said.

Redress for older or terminally ill survivors would be prioritised, Hipkins said.

The government also needed to work with survivors to determine what a public apology could look like and what form it should take, Hipkins said.

"It's not just about me standing here and saying 'I'm sorry' on behalf of the government, I could do that right now and in fact I would do that right now, but actually it needs to be something that's bigger than that, so we need to work with them about what's going to best deliver a meaningful apology for them."

Interim report findings: 'It is incomprehensible that human beings could behave like this towards another' 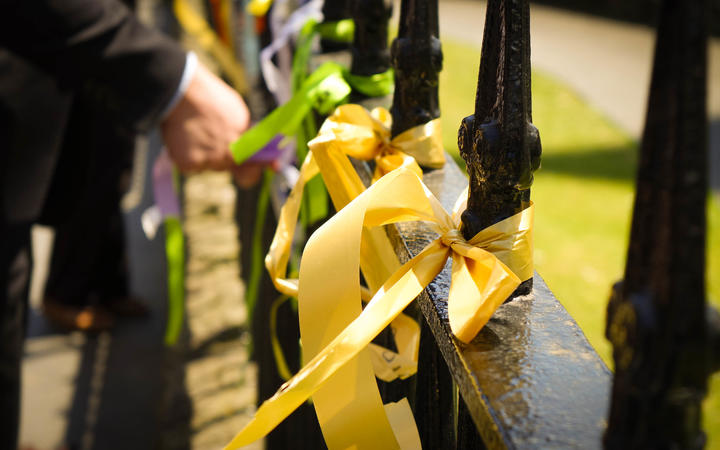 Ribbons were tied to the fence at the St Patrick and St Joseph Cathedral in Auckland at the end of the first Abuse in Care Royal Commission hearings. Photo: RNZ / Patrice Allen

The inquiry's 500-page interim report examines the complex and challenging fight for redress many survivors navigated following their abuse.

The Royal Commission has previously estimated that hundreds of thousands of people could have been abused while in care between 1950 and 1999.

Its report stated that despite "harrowing accounts and often obvious signs of physical, emotional or psychological damage", survivors' efforts to obtain redress were rejected "time and again."

"For many survivors, their experiences were downplayed, disbelieved or dismissed. Their claims sat in in-trays for months or years. They struggled to get their personal records, and when they did, some were so heavily redacted they could barely make sense of them," the report stated.

"A determined few continued their struggle in the courts, only to run into legal brick walls, the most overwhelming being accident compensation legislation and limitation defences."

For those abused while in the care of the state, the Crown eventually offered "modest" monetary payments and apologies through "inconsistent claims processes run by the same departments and ministries responsible for the abuse".

This happened while it defended claims taken to court, the report said.

The Crown lost sight of the survivors behind the complaints, it said.

"Even when it knew the substance of a claim to be true, it used aggressive tactics or hid behind technical defences, and after a series of losses by survivors, the reality became clear: survivors' only real option lay in a one-sided offer from a government agency that they could either take or leave."

The report noted the Crown feared settling claims "too readily" could open the floodgates and worried about the potential cost of settling with an unknown number of claimants.

The Crown also persistently believed there was no evidence of systemic abuse or failure, the report said.

"We know from our work in this inquiry that there has in fact been both widespread abuse and systemic failures in the care of children or vulnerable adults.

"These include understaffing and overcrowding, lack of vetting, supervision and training of staff, cultures of violence in some settings, lack of effective complaint mechanisms and practices in some institutions of actively moving staff around following complaints of abuse."

The redress systems for survivors of abuse in faith-based institutions were no better.

Similar to the Crown, faith-based groups "generally offered - after many delays or much questioning of survivors' accounts - a modest payment and a qualified apology and looked no further into the matter."

The redress systems in place were "intimidating" and institutions often just moved perpetrators - some convicted abusers - away, only for them to abuse others, the report said.

Support from faith-based groups to "rebuild broken lives" was limited or non-existent, it said.

"Neither State nor faith-based institutions were willing to accept the widespread abuse that could have easily been uncovered. The scale of the abuse was simply too horrific to acknowledge, the financial ramifications too huge to contemplate. So they told themselves these cases were not symptomatic of any wider problem."

The Royal Commission described this behaviour as "incomprehensible."

"It is incomprehensible that human beings could behave like this towards another. What is just as baffling is how those in authority failed in their responses to survivors' requests for redress.

"It was clear survivors had been deeply harmed by their time in the institutions that were entrusted to care for them. How, in the face of this, could anyone not be shocked and stirred into action?"

The inquiry also looked at the current redress systems in place at agencies like Oranga Tamariki and the Ministry of Social Development, as well as the Catholic and Anglican churches and the Salvation Army.

"We found them to be completely inadequate in many ways."

The inquiry said the processes have long delays, do not meet cultural needs, lack independent oversight and are designed to suit the institutions' own needs, not those of survivors. 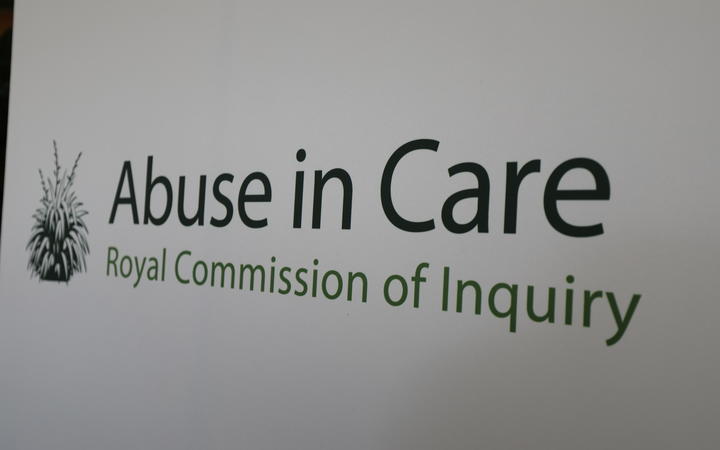 The Royal Commission of Inquiry into Historic Abuse in Care says belief of a survivor's account must be the starting point for making a claim. Photo: RNZ / Patrice Allen

The Royal Commission wants the governor-general, prime minister and leaders of faith-based institutions to publicly acknowledge and apologise for the abuse and the harm it caused.

It has also recommended public apologies are made to specific groups harmed, including Māori.

The system must provide adequate financial payments, facilitate services like health, education and housing for survivors, as well as meaningful apologies.

Belief of a survivor's account must also be the starting point for making a claim, the inquiry said.

"Our recommendations are far-reaching. They are more ambitious than any other redress system or scheme that has been established overseas. Our work to date tells us that this is necessary in order to restore the mana and oranga, or wellbeing of survivors who have suffered abuse and neglect in State or faith-based care."

The inquiry made 95 recommendations in total. Others include: