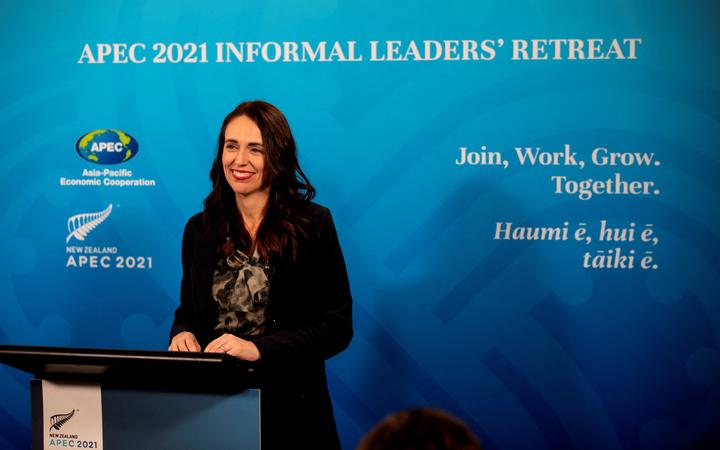 Prime Minister Jacinda Ardern speaks at a press conference after the APEC Informal Leaders' Retreat at the Majestic Centre in Wellington. Photo: AFP

All 21 countries in the Asia Pacific economic forum prioritised defeating Covid-19 and the economic recovery, as well as climate change mitigation and inclusive growth.

They also issued a joint declaration to reject vaccine tariffs and take steps to move away from carbon burning.

The plan, called the Aotearoa Plan of Action, also commits the countries to cutting red tape and boosting indigenous economies.

The summit of the Pacific rim countries comes at time of heightened regional trade and geopolitical tensions, particularly between China and the United States, as well as efforts to tackle the global pandemic and climate chaos.

Ardern, who chaired the meeting, said the plan stayed true to APEC's original mission of growing trade, while also looking to the future.

Outlining issues facing nations, she told the summit: "How can we get as many people vaccinated as fast as possible. How do we keep our businesses afloat and our people in jobs. How can we resume safe cross-border travel. How do we accelerate economic recovery. How do we ensure overall that we work together to secure an equitable response."

US President Joe Biden underscored his commitment to strengthening the relationship with APEC economies, while China's President Xi Jinping told the meeting economic and technical co-operation was important for the bloc and should receive further investment.

Leaders of group, including Australia, released the joint statement after the meeting, which pledged to address climate and environmental challenges.