Politicians of all stripes say the protests at Parliament today represent just a small minority of New Zealanders, as first-dose vaccination rates near the 90 percent mark. 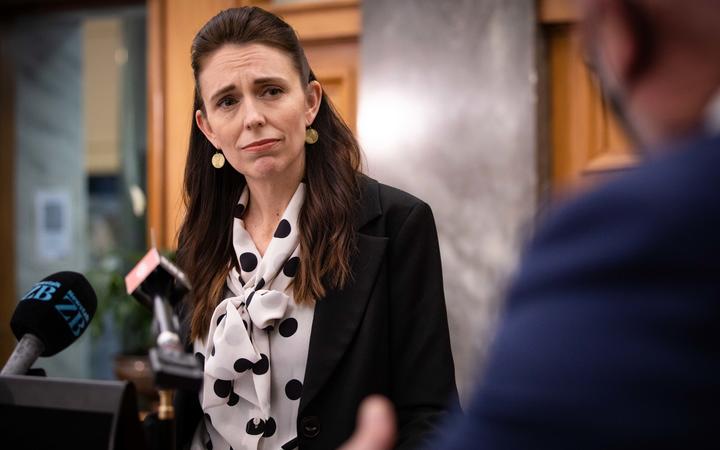 Thousands of protesters marched from Civic Square in Wellington to Parliament today, demanding an end to Covid-19 restrictions and vaccine mandates.

There were shouted chants including "freedom" and "you serve us", but the protest was largely peaceful. A fence was pushed over and tennis balls with angry messages were thrown at media, security and police as crowds began to disperse.

Prime Minister Jacinda Ardern said the protest was not representative of the vast bulk of New Zealanders.

"We're at over 89 percent of eligible New Zealanders having had their first dose of the Pfizer vaccine and I think they know and appreciate that we're on a road to be able to open up more, to having a bit more of that normality back," she said.

"So actually my message would be to them and it would be to say thank you - thank you for being vaccinated, thank you for doing what it takes to look after one another. What we saw today wasn't reflective of you, and of New Zealand."

She was aware of the protesters' views.

"I do run my own social media so I do get a slice of that but I'm very clear that's not indicative of the vast bulk of New Zealanders."

"Parliament has seen, of course, protest in its time and it is a place where, of course, people are able to freely protest and we value that about our democracy."

Security at Parliament was heightened, with police on the grounds and most of the main entrances blocked off. Speaker of the House Trevor Mallard said he had never seen such tight security in his nearly four decades as an MP.

National Party leader Judith Collins felt the security arrangements were appropriate, and said Ardern or ministers speaking to media could have inflamed the situation.

"I'm sure that they've taken some security advice on that.

"Parliamentary security have a difficult job to do because we are a very open democracy and we like to have people able to access Parliament and to protest.

"As we've seen on some of the social message sites that some of the people protesting have been writing on, some of the messages were quite violent and I expect that Parliament has taken those into account."

She noted that most of the people protesting today were there for peaceful purposes.

ACT leader David Seymour said people had a right to protest but also said today's protesters were a small minority.

"There weren't even enough protesters to be insured under the government's major events fund," he said.

He said vaccines were always divisive, but the government's rhetoric had made things worse.

"We would have got more vaccination done if we said to those people 'it's personal choice and up to you'. On the other hand, I hope those people go and get vaccinated before they prove natural selection.

"They should have said 'December 1 is freedom day, you don't have to get vaccinated, you probably should' ... I suspect the resistance to vaccination has hardened because of the divisive route the government has taken."

Covid-19 Response Minister Chris Hipkins also said the protesters were in the minority.

"I think there's a lot of things that are driving the anti-vaccination campaign. I think that it is a small minority, the fact that they're very loud shouldn't distract from the fact that a vast majority of New Zealanders are being vaccinated and there is good strong support for that across the country."

I saw the protest from the Beehive.

We will vaccinate more people today - in just one day- than turned up to that protest.

Thanks to all who have been vaccinated.

Also today, research centre Te Pūnaha Matatini released a paper from its Disinformation Project team, which observes and analyses the spread of mis- and disinformation in New Zealand.

They found that since the Delta outbreak first came to light on 17 August, the creation and sharing of mis- and disinformation specifically about Covid-19 had been accelerating week on week, and the language and other communications were growing more violent.

"Posts and engagement have drastically increased since 17 August 2021 and show a trajectory of growth and spread that is increasing, widening, and deepening every week," the paper found.

"The last twelve weeks show increasingly violent language and other forms of expression, which has become normalised and justified within the groups and individuals who make up the disinformation community in-group."

The researchers found the content shared tended to focus on a narrative of the state versus individual rights and responsibilities, and in the last month they observed an increase in content related to the QAnon conspiracy and conspiratorial narratives like white supremacist, incel or extreme misogyny, Islamophobia and anti-migrant sentiment, and anti-Semitism.

"The ecologies and spread of mis- and disinformation point to a broader threat: that Covid-19 and vaccination are being used as a kind of Trojan Horse for norm-setting and norm-entrenchment of far-right ideologies in Aotearoa New Zealand."

Hipkins said the level of misinformation was however less than had been seen in other countries.

"It is certainly growing, there's no question about that, but I think New Zealand has still been better off than other countries where it has been much more rife."