Firefighters have been told they have to be vaccinated - and there are concerns about what emergency coverage will look like when their first vaccine deadline passes on Monday. 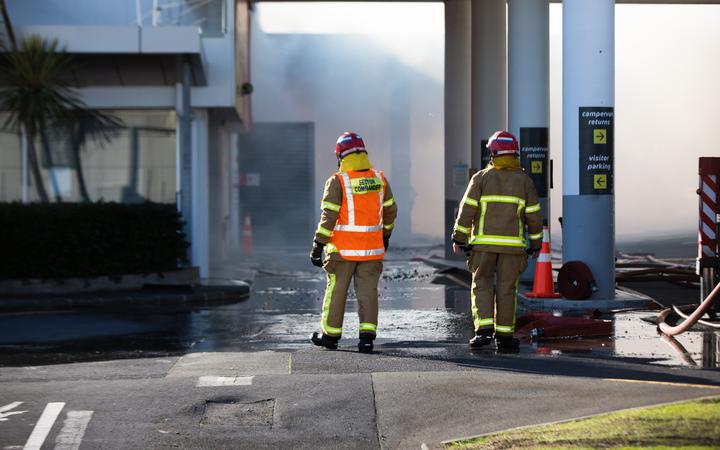 Some firefighters are frustrated that no proof of inoculation will be required. (file pic) Photo: RNZ / Dan Cook

It is not clear why the Covid-19 mandate was not announced publicly - nor if it applies to police. Anyone whose role puts them into close contact with working medical staff must be vaccinated.

News of the mandate only reached firefighters 11 days ago, despite the deadline for vaccinations being the same as for teachers announced much earlier - first dose by 15 November and the second by 1 January.

Volunteers make up four fifths of Fire and Emergency's (FENZ) 13,000 operational and community workers and some staff are concerned about the future of smaller rural stations if firefighters refuse to get vaccinated.

Other firefighters are frustrated that no proof of inoculation will be required as they are only being asked to make a declaration about their vaccination status.

FENZ said in a statement many staff must be vaccinated to undertake their roles. "Our people work alongside medical practitioners at incidents and go into schools when responding to emergencies and to provide fire safety education," national commander Kerry Gregory said.

"The order applies to any roles where a person is within two metres of a health practitioner providing health services to the public for more than 15 minutes or where our people's work requires contact with children or students. Around 13,000 of our people in operational and community based roles are covered by the order, including volunteers.

"The government has put this requirement into law, and Fire and Emergency must comply with it. We have now begun securely collecting vaccination status information to comply with the order."

Despite how close the 15 November first dose deadline was when the government published the vaccination order on 22 October, it appeared that FENZ was left with little time to deliberate on which roles would be covered by the mandate.

"The Covid-19 Public Health Response (Vaccinations) Order 2021 was gazetted on 22 October," said Gregory. "We worked at pace to interpret how this applied to Fire and Emergency and our work - gaining legal advice and working closely with our unions and associations.

"We continued to keep our people updated throughout. We let our people know what roles were covered by the order on 29 October, once that work had been completed, and that people in those roles would need to have their first vaccination by 15 November."

FENZ was continuing to work through the implications of the mandate and to keep staff updated, he said.

A spokesperson said FENZ would have a better idea next week of the ramifications for staffing and coverage once the deadline passed for first vaccination doses.

Police did not respond to questions about whether the mandate for firefighters would also apply to police.

"NZ Police are currently in discussions with the government about mandatory vaccination requirements for police staff," said a spokesperson.

"This work is a priority as many of our staff have daily interactions with a wide cross section of people, particularly those who are most vulnerable."

The statement did not say why the wording of the existing mandate would not oblige police who worked alongside medical staff in their daily jobs to have their first vaccine by Monday.

FENZ is refusing to say whether the Ministry of Health (MoH) shares information about locations of positive Covid-19 cases or isolating contacts. More than 2000 people with the virus are currently living at home.

It follows three fire evacuations at an Auckland apartment block in a month where at least one person had Covid-19.

FENZ refused to say whether it had Covid-19 information about the North Shore complex before the callout, which was prompted by sprinklers or an automatic alarm.

"When attending any callouts across the country, Fire and Emergency personnel have a range of measures to protect themselves from potential Covid-19 exposure," Gregory said.

"They wear protective gear, which can include masks, medical gowns, gloves and glasses, and socially distance where possible."

When incidents were prompted by 111 calls, people would be asked if there were any known Covid-19 cases or people isolating at the address, he added.

The Ministry of Health defended its decisions not to publicise the building as a location of interest, despite two evacuations on 8 October where people were seen without masks and not distancing in the adjacent car park.

Firefighters were subsequently notified about the diagnosis, and an orange sign was posted on the Rosedale Road building.

Rosedale later become a hotspot for infections, but the ministry refused to say how many cases were linked to the apartments, which has been used as social housing.

RNZ asked the Ministry of Health whether the person tested positive before the fire evacuation, or whether they were isolating as a close contact.

In a statement, the ministry said for privacy reasons it did not share information about individuals including when they tested positive and their normal place of residence, unless there was a specific public health reason to do so.

"The focus of publishing locations of interest is on locations where contact tracers don't have a good idea of who was there at the relevant time, which can include large apartment complexes," said a spokesperson.

"However, for some of these places, we do have a good understanding of who was there at the relevant time and an effective means of contacting those people through existing communication channels and networks.

"These situations are closely managed by contact tracers, who may determine that the location does not need to be added to the list published online."

It did not say how many, if any, cases were linked to that exposure event, and had this to say about why it would not release suburb-level case numbers: "We are not currently routinely releasing information about Auckland suburbs where cases are found. This helps to ensure there is a focus on testing in suburbs where it's needed."

Rosedale, Redvale and New Lynn were the first suburbs identified as areas where the ministry was encouraging testing, because last month they had high rates of positive test results but a low proportion of testing.