Firefighters who say they are being exposed to cancer-causing asbestos have issued a safety notice against their employer. 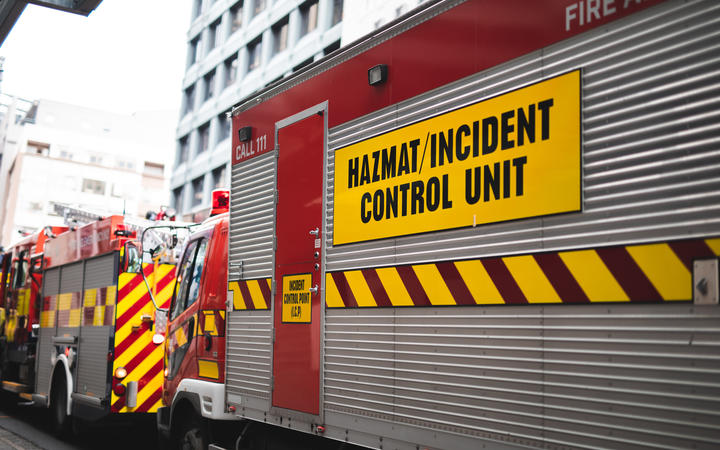 Fire and Emergency admits it has failed to meet health and safety deadlines - but says it has "sufficient protection".

WorkSafe says it will be assessing Fenz's asbestos procedures.

The workplace relations and safety minister is being briefed this week and meeting the professional firefighters' union.

The asbestos threat dispute has come to a head after asbestos drifted through Ponsonby from a fire 11 months ago at the intermediate school, forcing a month-long evacuation of a dozen homes.

Fenz says the fire crews at Ponsonby were decontaminated correctly.

But senior firefighter, and Auckland City health and safety rep, Conrad Pentecost says they only wore breathing apparatus to start with, not in the hours that followed, and that the whole response highlighted widespread inadequacies.

"The Ponsonby fire was the last catalyst," he said.

"According to the monitoring, they were picking up dangerous levels to late the following afternoon.

"That was basically my crews that were being contaminated, and it was just basically being brushed off."

Local residents have spoken out previously about how poor authorities were at warning them.

The professional firefighters' union has told the government and Fenz management, that Fenz is guilty of "serious and ongoing failure".

"Every time a firefighter is exposed due to failure of Fenz to establish, implement and monitor decontamination protocols is an avoidable exposure to a carcinogen," the union said, complaining it was having to force Fenz to act.

Pentecost made his first complaint in 2019, around the time of a major asbestos-tainted blaze at a factory in Onehunga.

Eighty firefighters fought the Argus fire - and some reported to commanders there seemed to be asbestos burning, according to a review by Fenz released to RNZ.

But the building owner had said there wasn't any asbestos, so nothing was done about the firefighters' warning.

Decontamination at the factory was "ad hoc", the review said.

"Some appliances returned to their stations in a heavily contaminated state, both inside and outside."

Only two days later did Fenz confirm there had been asbestos.

Crucially, in terms of other fires, the review warned Fenz was "potentially failing to comply with the Health and Safety at Work (Asbestos) Regulations 2016".

Fenz told RNZ in a statement that it is compliant with the law.

However, it admitted to the union in July that its risk management documentation is out of date with the 2016 laws. It is being updated.

At fires such as the Ponsonby and Onehunga ones, commanders got a site report beforehand about hazards. At Onehunga it contained wrong information from the building owner and user.

Act MP Simon Court said he'd been contacted by firefighters worried about exposure, saying asbestos was ending up "all over the exterior and interior of the vehicles, and the exposure continues from contaminated surfaces, seat fabrics and interiors".

WorkSafe has identified asbestos as the leading cause of workplace-related disease causing death. It estimates 170 people die this way each year.

Court said firefighters wanted urgent improvements of standard operating procedures and access to "the same health monitoring which all workers exposed to asbestos in their job are entitled to under the law, and which employers are obliged to provide".

A senior station officer at Auckland City, John Roberts, said Fenz was lagging behind the code of practice on asbestos enacted in 2016.

This was one reason many firefighters nationwide were complacent, Roberts said.

"In nearly 40 years I've never had any specific asbestos training," he said.

"There are procedures [but] some of them are out of date.

"If there was more awareness of the dangers and training in identification, that would help."

The union asked the regulator several months ago to investigate.

WorkSafe says it will be assessing Auckland fire stations for how they deal with asbestos.

Fenz says its engagement with WorkSafe "confirmed that we do have a system available for the risk management of asbestos", Deputy chief executive of people Brendan Nally told RNZ.

"We're confident our procedures provide sufficient protection from the harmful effects of asbestos."

It is also updating how it deals with asbestos after a fire, by adapting a model developed in Australia for dealing with carcinogens.

"WorkSafe ... have not raised any concerns with this approach," Nally said.

Fenz says it has processes, showers and laundries for cleaning down people, gear and trucks. Gear is wet down, bagged, and specially cleaned.

Roberts says this does not always work in practice, and better decontamination is vital.

The Onehunga fire review notes how not everyone reported their asbestos exposure when they should; there were 18 such reports all up.

Pentecost said Fenz must introduce comprehensive tests at stations and in firetrucks, and monitoring of firefighters' health.

"We've got a very, very big blindspot," he said.