The Defence Force's (NZDF) ability to respond to a major disaster has been significantly compromised, mainly due to its security role at managed isolation hotels. 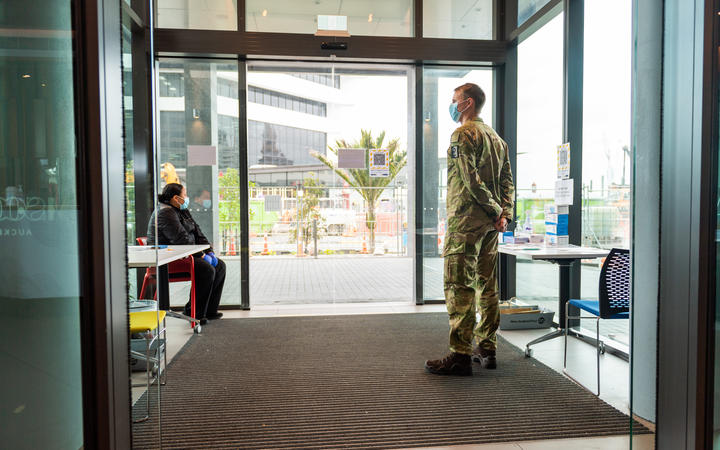 A security guard and soldier guarding the entrance to an Auckland managed isolation facility. Defence has been involved in the government's Covid-19 response since the very start. Photo: Supplied/ NZDF

Top-ranking officials have warned that with more than 1000 troops at any one time staffing MIQ and quarantine, or preparing to go, it would not be able to respond at the same scale and speed as in the past.

Details about the significant impact on training, the ready availability of personnel and what that means for any large scale disaster response are contained in briefings obtained by RNZ under the Official Information Act.

"I am conscious that the NZDFs ability to respond to a Christchurch [type] of Kaikōura scale earthquake, or a Pacific event of the size of Tropical Cyclone Winston in Fiji, will remain degraded for the foreseeable future", Chief of Defence Force Kevin Short told minister Peeni Henare in June.

The ongoing commitment "reduces the capability of the NZDF to respond to another national or regional emergency with previously expected scale or speed", made worse by the "wider" impacts of the pandemic on training and supply chains, he advised.

There has also been a "skill fade of core military competencies" with the reduction of usual activities.

Air Marshal Kevin Short told RNZ, along with border restrictions, it is having an inevitable impact.

"If you take 1300 people out of our normal operations then of course, it's going to have an effect on our response options.

"It will reduce how we do respond ... and in some cases have an effect on the duration of their response."

The Defence Force could deal with smaller scale emergencies, he says, and would pull out all stops in the event of a major disaster.

"To give you an example, we could shut down a particular squadron which would generate 100 people to actually assist, or tie up a ship ... so it gives us time to actually gather the forces, as it were, to actually provide whatever response we're required to do." 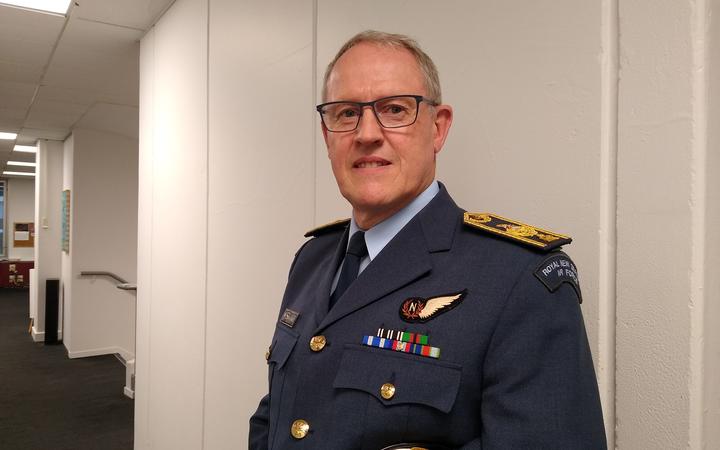 Defence Minister Peeni Henare admits it is a "serious" problem.

"We, as a government, do initially hold concerns about whether or not we'll be able to respond depending on how big the matter is, but we've made it clear that right now, our number one priority is Covid-19."

They would work with NZDF to make sure New Zealand is "equipped and ready to respond" but Henare says the Defence Force has made it "clear that there are challenges should there be a large scale event".

"New Zealand should be very concerned about the possibility that a major event occurs and we simply can't scramble our Defence Force quick enough; really highly professional people, well trained, have always responded well in the past.

"But at the moment ... there's a real shortfall if something was to happen in the Pacific, or further afield that they need to respond to."

Defence has been involved since the very start, setting up the first quarantine facility at Whangaparāoa early last year and supporting police at checkpoints. Since August 2020 that commitment has steadily increased as more personnel were brought in to shore up security and improve logistics; at any one time there are up to 1300 either at managed isolation and quarantine facilities, or preparing to go there.

As the main contributor to MIQ numbers, the Army's ability to respond to global or regional events has been compromised, and the "cumulative degradation" of sustaining those numbers has "seen the Army lose the ability to train collectively above the small teams level".

Making the situation worse is civilian staff have not been assigned to MIQ duties, and due to its "sensitive and high profile" nature, many required are more senior people, ranking from Corporal through to Major, the same people needed to lead the "raise, train and sustain functions" of the force.

The MIQ commitment is likened to New Zealand's deployment to East Timor in 1999, with "similar levels of command, control and coordination demands" in a May briefing. As the numbers increased, the paper said that had put pressure across all three services, extending "beyond pure numbers of personnel to include a reduced availability of some ships and aircraft".

Defence could handle "smaller scale response options" but would be severely tested by a sustained, major disaster, or a cluster of smaller emergencies at the same time.

It is working with "partner agencies", like Ministry of Foreign Affairs and Trade (MFAT), Emergency NZ, the National Emergency Management Agency and Department of the Prime Minister and Cabinet (DPMC), to make sure their contingency plans "consider the key reductions in NZDF response capacity over the next year".

The government's acknowledged the huge pressure being brought to bear as a result of MIQ duties. It has agreed not to ask for any more personnel and has been working to actively reduce Defence numbers at the border.

Air Marshall Short says they are also very aware of the impact on individual morale, and are working to keep attrition rates as low as possible.