Prime Minister Jacinda Ardern says the travel pause with New South Wales and Queensland continues but those who ordinarily reside in New Zealand will be able to travel subject to requirements.

Ardern says the past week has been the most challenging for the Australian travel bubble so far.

"Our decision to close the border was about protecting New Zealanders' health and to protect businesses and the economy ... a temporary measure to help us get a better handle on the situation, as well for the Australian health authorities to respond to their various outbreaks."

She says advice shows Western Australia and Northern Territory have their outbreaks contained, and travel will resume from 11.59pm on 9 July.

The pause remains for NSW and Queensland, but Ardern says those who ordinarily reside in New Zealand will be able to travel subject to requirements.

These requirements are similar to those for people who returned from Victoria during the pause there, and include:

She says the government had been clear about "flyer beware", and says the decision to allow people back from NSW and Queensland is based on the fact it had been 14 days since the outbreak.

However, pre-departure tests are required, and anyone linked to a person or place of interest is not permitted to travel. 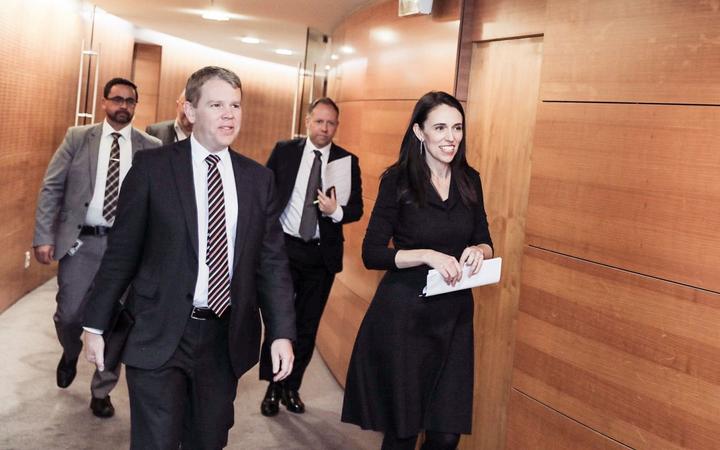 "When it comes to reopening with New South Wales ... we have no clear date in mind."

She says if the restrictions were to lift, it would always be determined based on whether New Zealand is ready.

Ardern says the border system has flexibility based on circumstances built into it.

Ardern says the government is constrained in exact numbers of vaccines it expects to be delivered on which days but the next vaccine delivery is expected to be similar to the 150,000 that arrived over the weekend.

As the vaccine rolls out, the government will continue to provide its latest thinking in terms of restrictions including on travel, she says.

Asked if she would be okay with some Covid-19 being in the community once the vaccine rollout is complete, Ardern says at the moment our thinking has been "let's continue on a path that preserves as many New Zealanders as possible. Variants do pose a new risk ... we will continue to watch and observe".

Hipkins says he would like to see saliva testing rolled out more quickly.

Some workers have suggested they would prefer to stay with the nasal swab testing instead because the saliva testing requires people to not have smoked or eaten for a "reasonable period" beforehand.

"I would like to see it more widely used and will lean on the team."

On mandatory QR code scanning and mask use, Ardern says the government has some initial advice but is waiting on more information.

The Cabinet hopes to make announcements about that next week.

Ardern says QR scanning is important as a precaution at alert level 1, but mask use is being thought of as a reaction to a threat rather than a wider precautionary measure, indicating higher mask restrictions would likely be applied at higher alert levels.

Helping Fiji with its Covid-19 crisis

Ardern says Australia is helping with Fiji's vaccines in the meantime and there is a member of the NZ Defence Force and another medical officer to support work on infection control.

"I actually spoke to the Prime Minister of Fiji last week and that was the second call that we've had in recent weeks.

"We have provided Fiji with $40m in aid and support in recent times ... we made Fiji aware some time ago around the likely time that we'll be able to release AstraZeneca doses based on the time it would take Medsafe to approve AstraZeneca in New Zealand."

Feedback from the Fiji Prime Minister was that any delays to vaccine deliveries because of New Zealand's approvals would not materially affect the situation, Ardern says.

"Our view is that all individuals, all political parties, we would have encouraged and hoped would be upholding the decisions of the judiciary,"

"We hold great faith in the systems of Samoa - their electoral system, their judicial system, the rulings of the court, and their ability to use those institutions to be able to resolve the impasse that they've reached.

"If you look at those rulings they've very clearly delivered a path for Samoa."

She says New Zealand has a very close relationship with Samoa and is in contact, but has avoided making a statement on whether intervention by other states may be required.

The government has also welcomed back its Conservation Minister Kiritapu Allan, who returned to Parliament today following treatment, about three months after being diagnosed with cervical cancer.

Ardern says she feels fantastic about the return of Allan.

"To have her just walk back into Cabinet and take her seat and just resume the position that she had was just a really great moment for everyone."

It is her intention that the Emergency Management position remains with Kris Faafoi for a couple of weeks. She says Allan inspires her, and did so before her diagnosis as well.

Meanwhile, Labour is also facing some pressure from within after MP Louisa Wall broke ranks to criticise China over what she called the slave labour trade in China, the harvesting of organs from Uyghurs and Falun Gong populations.

Parliament in May unanimously called for action to prevent severe human rights abuses in the majority-Uyghur region of Xinjiang, but stopped short of declaring it a genocide.

Ardern says Labour and the government already has a position of doing more to reduce modern slavery, and has established an advisory group within MBIE to update legislation on that.

Asked if that work needs to be sped up given human rights abuses in China, she says the setting needs to be correct generally on modern slavery.

Ardern says it affects and is influenced by supply chains.

"From New Zealand's perspective, we do not import organs from any country except as part of donor arrangements with Australia, we have raised as a government the issue of organ transplantation with China and we have sought updates on this issue and policy reforms and policy reforms for consent and transparency."

She says Wall has "spoken with her IPU hat on" rather than as a member of the government in this area.