Prime Minister Jacinda Ardern has welcomed announcements that Pfizer will deliver 1 million doses of Covid-19 vaccine in July, and the completion of a huge police operation.

Ardern spoke about the announcement that Pfizer would deliver another 1 million doses in July, and had assured the government about delivery of its remaining doses this year.

"The vaccine rollout is the largest and most complex undertaking in our health system history," Ardern said.

"We have at our disposal one of the best vaccines in the world and starting next month we'll begin the process of progressively making it available and of course free of charge to every new Zealander over the age of 16."

She said Cabinet would make further rollout decisions on Monday next week. That information would be made public the following week, including details about the vaccine booking system.

"As we prepare for wider vaccinations for New Zealanders it is my plan to be vaccinated at the end of next week," she said.

Covid-19 Response Minister Chris Hipkins said they had not needed to put pressure on Pfizer to get assurances about the vaccine delivery.

He and other health ministers were vaccinated early in the campaign to show confidence in the vaccine and encourage uptake by the public. 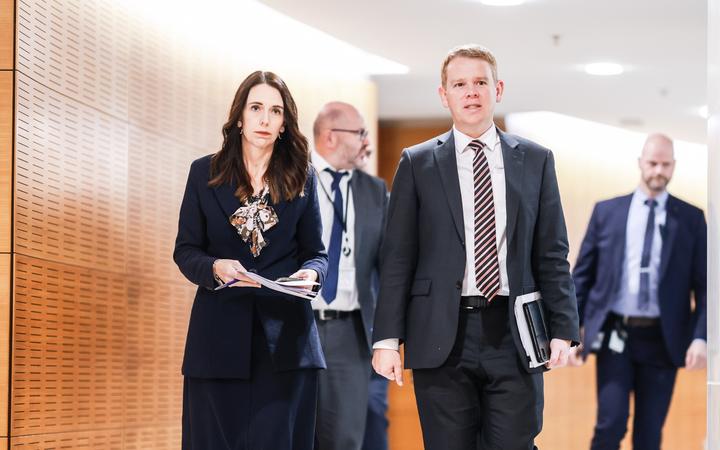 He said Pfizer would be delivering "more in the first couple weeks of July than we've been getting up until now and then even more in weeks three and four and that really works with our ramping up".

"It means DHBs can now start to gear up with certainty [about] exactly what deliveries they are going to get."

Ardern said New Zealand had a "solid" relationship with Pfizer.

"I think we're right in the right path, in the right order, globally, when it comes to our vaccination rollout," Ardern said.

"We are expecting that the larger shipments to be in the second half [of the year] ... I breathed a sigh of relief when I got a message from Minister Hipkins telling me what July was looking like.

"We don't have quite the same anxiety we had previously - that we were ramping up maybe too quickly for the deliveries."

She said delivery schedules were being received closer to the deliveries being made, but the government was ramping up the rollout faster than that, which was why it seemed there was a gap.

Ardern was also speaking after police this morning announced as part of an international crime sting they had made 35 arrests, laid 900 charges and seized $3.7m in assets.

Those arrested included senior members of the Waikato Comancheros, the Waikato Mongrel Mob and the Head Hunters.

"Increasingly, gang activity has an international element to it, and that means we need to work internationally and increasingly we're seeing the results of that work."

"That's why as a government we have invested in ensuring we have those extra investigators working in the organised crime space, and I'd like to think the results of today is testament that was a wise investment.

"When you've got 300 officers, 37 search warrants across the North Island, $1 million in cash, that is being recovered, 35 arrests, 900 charges - that is a significant event. No doubt it will have an impact on organised crime in New Zealand."

"You can see with the number of arrests the significance, particularly around methamphetamine, but also the plans that will hav ebeen halted as part of this work. It is very significant."

She said as a small country, New Zealand already had ties with the AFP (Australian Federal Police) and the FBI (Federal Bureau of Investigation) in the US.

Nurses yesterday voted to go on strike on Wednesday, after rejecting a second pay offer in their current round of negotiations.

Experienced nurses like Cheryl Hammond of Bay of Plenty, in the industry for 43 years, said they feared for the future of their profession.

Ardern said strikes were part of the wage negotiation system, but the government was "not in the position" to meet nurses demands.

She said the pay offer focused on those on the lowest pay bands, some being eligible for nearly a 10 percent hike.

"At the moment nurses have put an offer that is 17 percent, we're just not in the position to meet those expectations. That's not stopping us from trying to lift the wages of the lowest paid."