The National Party has rescinded its backing for Chris Liddell to take over as secretary-general of the OECD given the recent rioting at the United States Capitol. 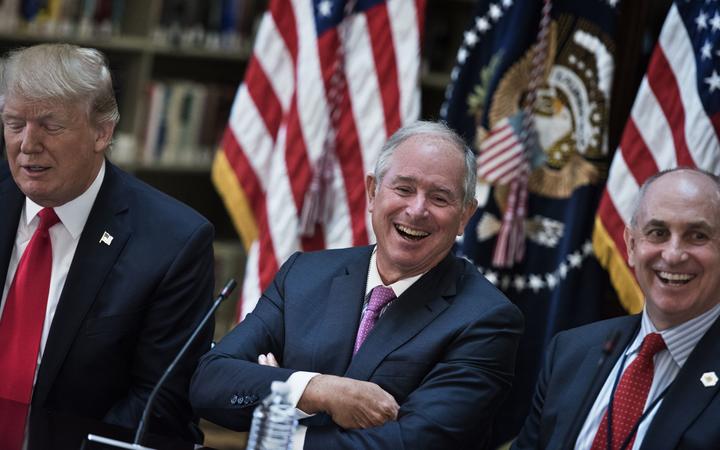 From left: US President Donald Trump, CEO of the Blackstone Group Stephen Schwarzman and Chris Liddell share a moment before a meeting at the White House in April 20017. Photo: AFP

The New Zealand businessman-turned Donald Trump advisor was nominated for the job by the US president last year.

At the time, opposition leader Judith Collins said it was a no-brainer for the government to back Liddell, describing him as highly qualified.

But in a statement issued to RNZ, Collins said the US Capitol riot had rightly tarnished those who incited the violence.

"The rioting that took place in the US Capitol was a disgraceful attack on democracy," Collins said.

"Mr Liddell's ties to the Trump Administration cannot be overlooked here, making it difficult to see how he would be suitable to uphold the OECD's strong commitment to democracy."

In November, Collins said the experienced businessman would work more in New Zealand's interests than anyone else in the role.

Asked at the time if his appointment would be in the country's interests given the Trump administration has undermined the WTO and various global treaties, she said: "I'm sure you'll find that when he's in that job, should he be fortunate enough to get it, he will be looking to the whole of the situation, particularly for New Zealand."

The government has yet to say who it will back for the position, but Prime Minister Jacinda Ardern last year said Cabinet would take into account a range of factors before making its decision.

"We have a wide range of considerations. Citizenship is not the only one," Ardern said.

National is not the only party backing away from its support for Liddell, with ACT also performing an about-face.

Speaking to RNZ today, ACT leader David Seymour said the party could no longer support Liddell's nomination given "his refusal to denounce the more recent events".

"Up to a point, you can say, look the guy is trying to be professional ... don't blame him for the guy he works for," Seymour said.

"[But] the role of the president in encouraging people to go about the protests which turned extremely violent was unconscionable."

Liddell last week told the NZ Herald he was "horrified" by the riots and "unconditionally" condemned them. Seymour said he had not seen those remarks.

Seymour said Liddell's comments to other media, describing the "terrible day" as a "setback", were "insufficient given the gravity of the events that occurred."

In October, the Green Party urged the government not to support Liddell for the OECD position, saying "Trumpish anti-science, anti-cooperation politics" had no place in international governance.

"Aotearoa just overwhelmingly voted for governance by values that would be eroded if a guy like Liddell was the head of a governance body like the OECD."