New Zealander Chris Liddell  kept a low profile during his time on Trump’s team in the White House over the past four years. But last weekend TVNZ aired an hour-long chat with the man who’s now seeking support to lead the OECD. It was the longest interview with a political figure on New Zealand TV for years. How did it go? 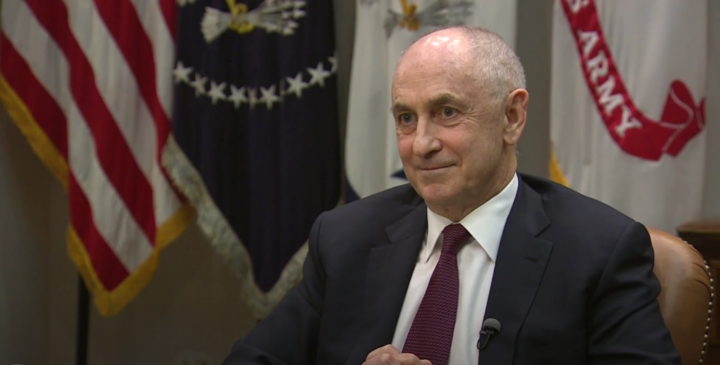 Last weekend from Washington DC, TVNZ’s Jack Tame introduced his exclusive interview with the former Kiwi businessman as one “we’ve been working years to bring you.”

It took up the entire episode of TVNZ’s weekly publicly-funded politics show Q+A, which touted it as his first ever interview about his role in Trump’s White House.

But it wasn't the first time he'd spoken about his political work.

Andrew Dickens told Newstalk ZB listeners the next day that his ZB colleague Barry Soper had also had a sitdown chat with Chris Liddell in the past.

Soper has also written more than once about meeting Liddell on visits to the US.

“He loves Kiwis, always greeting you with a bear hug, the sort of thing you'd expect from a boy from Matamata,” he wrote last May.  (Who knew Matamata males were such celebrated huggers?)

But Soper’s interview was in April 2016 and not for broadcast media. It was for Auckland University Business School’s Straight Talker series with a live audience and posted to YouTube.

At the time Liddell was yet to sign up for Team Trump, but he did talk about working for the Republican Party’s Mitt Romney in 2012.

After that, Liddell said that he wrote a book about presidential transition planning which - according to him - is now regarded as the “gold standard” for the subject.

If so that might have played a part in landing that role in Trump’s White House, where Jack Tame talked to him last week for almost an hour.  TVNZ’s Q+A broadcast the lot - making it the longest political interview with anyone on mainstream New Zealand TV for many years.

But before it went to air Tame was told there were “strict parameters”.

In the interests of transparency:
-Chris Liddell and I agreed on subjects
-Given his ongoing role as transition manager and Trump’s fraud claims, Chris would make no comment whatsoever about anything that could impact the transition.
-The IV was 50mins & we will broadcast it all. pic.twitter.com/9OQ3Gp0gw9

That was a pity.

The transition is now a deeply controversial issue because Trump and his team  - including Liddell - have been accused of obstructing and even sabotaging the handover to Joe Biden.

But Trump’s climate change record and the administration’s efforts to undermine several international organisations (and how that squared with Liddell’s nomination to lead the OECD) were discussed at some length.

Tame also asked about Liddell’s involvement with the policy of separating children of would-be migrants from their families at the US southern border.

Back in August NBC News in the US reported that a meeting of Trump’s most senior advisers voted by a show of hands on whether families should be split up if they crossed the border.

“Whoever wrote that was relying on someone who was not in the room and doesn’t actually understand the way we run it,” he said.

The reporters from NBC who broke that story back in August were Julia Ainsley and Jacob Soboroff, whose book about that controversial policy - “Separated: Inside an American Tragedy" was on the New York Times bestseller list when it was published in June. He also received the 2019 Walter Cronkite Award for Individual Achievement by a National Journalist.

He told Mediawatch their reporting was not based on third-hand reports in other media, though other media have also reported on the White House meeting in question. He noted Liddell did not deny NBC’s claim he was invited to a meeting at which the policy was discussed.

However, Liddell went on to tell Tame in TVNZ’s interview the family separation / 'zero tolerance' policy was “terrible” and he would not have voted in favour of it if asked.

He also told Tame there was nothing that went on in the Trump White House these past four years that made him uncomfortable enough to take a stand - or walk away from his job. He said he still admired Trump’s “fearlessness” and how he represents people in the US.

He said “the hollowing out of the middle class” was “tearing the social fabric” in the US and then he talked a lot about world trade, free trade and protectionism.

But Liddell did not accept that the US response to the Covid-19 pandemic had been disastrous.

“There’ll be plenty of time to come for post mortems next year,”  he said - in an unfortunate choice of words.

“Some people don’t talk to me because I work here,” he said.

But right now the friends he needs are overseas ones if he’s to succeed as the US nominee for the OECD, representing 37 developed nations.

With that in mind there was one question Tame didn’t ask on Q+A last weekend: why - after years of rejected requests - did he agree to talk last week for the first time about his role in the Trump presidency?

One likely answer is that the Trump presidency is over despite what the president and his loyalists say.

Close proximity to Trump is no longer very good for business, something Liddell told Tame he is very good at.

But while his chances of the OECD job seem slim his pulling power in the media here is still significant.

No-one else in recent times has commanded an entire hour of mainstream free-to-air TV from their place of work with one of the network’s top hosts.