Children's Minister Kelvin Davis has blamed his ministerial colleague, Peeni Henare's, lack of Cabinet experience for why he mispoke on Oranga Tamariki's leadership. 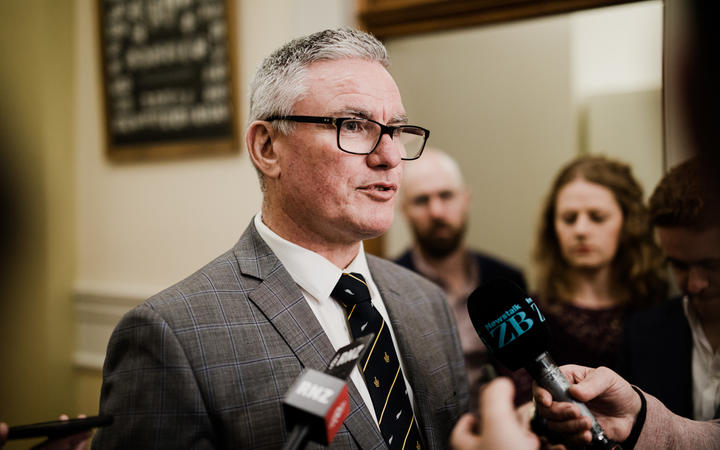 Henare, who is Whānau Ora Minister, says it wasn't his intention to step on Davis' toes.

The two senior Cabinet ministers ended up in a public scrap after Davis scolded Henare for not staying in his own lane.

The feud was sparked by Henare speculating on Grainne Moss' future as chief executive of Oranga Tamariki.

It kicked off when Henare gave an interview to Te Ao Māori News on Tuesday night.

He said he wasn't surprised by speculation around Moss, who "allegedly may be vacating in a couple of hours" because "if we want to move forward, we need to look at the people running these organisations".

Henare went on to say the government needed to learn from its mistakes.

"That's why I'm saying we need to look for the right person to lead this government department,'' he told Te Ao Māori News.

But those comments came back to bite, with Henare instead being read the riot act by his colleague and close relative.

In a statement to RNZ, Davis said, "given public comments made by Minister Henare speculating on the employment status of the chief executive of Oranga Tamariki, I think it's important to make some things clear.

"When I became aware of Minister Henare's comments, I called him and advised him that his comments were both inappropriate and inaccurate, and that he does not speak for me as the Children's Minister."

Today Davis told media on the way into the House that he and Henare in the first instance were whanaunga, mates and colleagues.

"I contacted him and explained my position on what he'd said, he accepted it, and we're still whanaunga, mates and colleagues.''

Asked if Henare had overstepped the mark speaking for Davis, he responded, "he's a new Cabinet minister, but I think everyone knows a minister speaks about their own portfolios, and he doesn't talk about other ministers' portfolios''.

Davis says Henare's speculation about time being up for Moss hasn't affected his relationship with the chief executive but he still refused to express confidence in her.

"There are issues with the leadership of Oranga Tamariki, and I am dealing with it. But let's be clear, those issues are wider than just one person.''

Not so keen to talk today was Henare, who responsed simply "no comment" when asked whether Moss should resign.

He also appeared to go on the defensive telling media to "get the translations out and have a look" in regards to him starting rumours about Moss' departure in his interview with Te Ao Māori News.

All he would say is that his "intention wasn't to overstep the mark" and that he and Davis were "both committed to the betterment of our tamariki''.

Somewhat muddying the waters today was Māori Development Minister Willie Jackson who told RNZ the Labour Māori caucus has a view on the future of Moss.

"But we don't want to get in the minister's way, we want the minister to make the decisions and we have to keep our views, we have to respect our minister,'' he said.

"We've always talked about Oranga Tamariki, we've got strong views in terms of the future of the kaupapa there, but in terms of the leadership that's something for Minister Davis to work on,'' Jackson said.

When RNZ put these comments to Davis he responded that it was "not for the Māori caucus to express a view''.

"I'm the minister for children and I'm the one who will be talking about it not the Māori caucus.

"I'm not going to share the conversations that the Māori caucus has had.''

Davis denied the Māori caucus had been "muzzled" on the issue, saying he reiterated all the time that it was for ministers to speak on their portfolios.