Oranga Tamariki's chief executive Grainne Moss is digging in, refusing to resign in the face of stiff criticism, but has acknowledged is yet to eliminate structural racism or fully adopt the recommendations of a 1998 report. 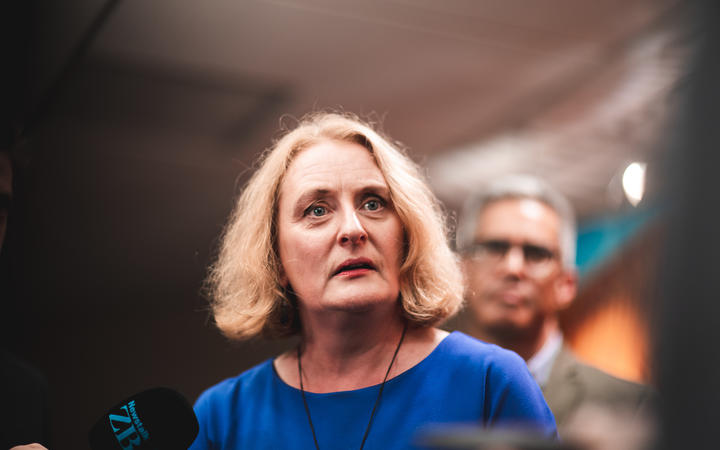 Yet another scathing report into the agency was released this week - and the new Minister for Children Kelvin Davis has refused to express confidence in her leadership.

The Waitangi Tribunal's own inquiry into Oranga Tamariki convened in Wellington today, where Grainne Moss conceded for the first time publicly that structural racism exists within the agency - but she said she still had work to do.

"I'm not set to resign, I can confirm I'm staying in my role... I'm absolutely committed to the kaupapa, we've made lots of progress, but there's lots more to do and it's a privilege to be able to have an opportunity to improve the outcomes for tamariki, rangatahi and their whānau," she said.

A damning report by the Children's Commission this week concluded many major failings by the agency were simply unfixable.

The commission wants an immediate end to uplifts of pēpi Māori from hospitals and wants to prevent all uplifts where the whānau is not notified first.

Moss dismissed Minister for Children Kelvin Davis's refusal to express confidence in her leadership, and said she had not been asked to step down.

"We're in the process of getting to know each other," she said.

"We've had some very constructive, positive meetings, conversations, and he is deeply committed to better outcomes and I'm committed to those outcomes too."

Better outcomes seems a long way off with multiple inquiries highlighting major failings in system, including the traumatic way social workers have taken babies from their mothers without notice.

The Waitangi Tribunal's urgent inquiry is the fifth into the agency since the attempted uplift of a Māori newborn from a Hawke's Bay mother's hospital bed last year.

In her submission, Grainne Moss conceded that the Crown was yet to eliminate structural racism.

"Structural racism is a feature of the care and protection system which has had adverse affects for tamariki Māori, whānau, hapū and iwi, and has detrimentally impacted the relationship between Māori and the Crown," she said.

She also acknowledged the Crown's failure to fully adopt the recommendations of the 1988 Pūao Te Ata Tū Report, which outlined ways the Ministry could address racism and better respond to the needs of Māori.

She said Oranga Tamariki had made some progress - including seven formal partnerships with iwi and adopting the new 7AA legislation in many areas, which required decision makers to consider the importance of a child's whakapapa when they entered state care.

"It is still hard to conclude that 7AA does no more, and I say this carefully and thoughtfully, perpetuate in law a master and servant relationship."

He said many of the problems at Oranga Tamariki could not be fixed by a restructure, and the only way forward was to devolve power to hapū, iwi and Māori organisations to do the agency's work.

"In our view, in its current form, it is highly unlikely that the care and protection system can deliver both safety and wellbeing to tamariki Māori and their whānau."

Re-imagining a new state-care system where Māori have the decision making power and resources may not be as simple as it sounds.

The tribunal spent much of the day deliberating and questioning submitters about what that would actually look like, and how to navigate issues where tamariki live outside of their tribal lands.

Those discussions will continue tomorrow, when the tribunal meets again in Wellington.