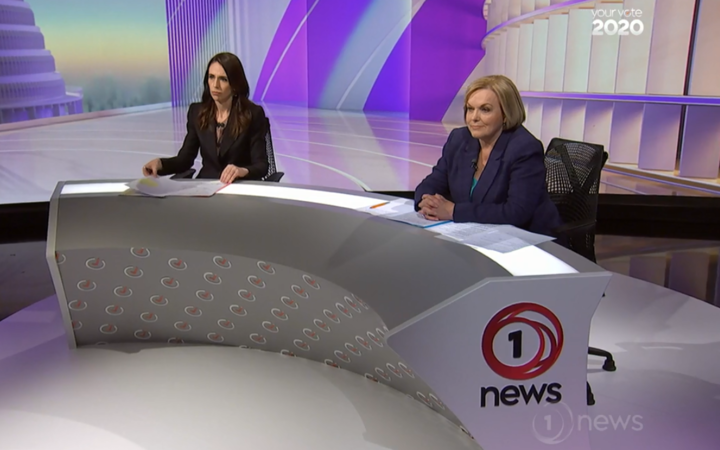 Jacinda Ardern and Judith Collins went head-to-head in a muted final face-off on Thursday night, in what seemed at times to be an exercise in warding off the inevitable.

The preceding 1News-Colmar Brunton poll brought more confirmation of what is becoming increasingly obvious: National does not have a path to power.

The magnitude of advance voting only added to the sense of futility. A staggering 1.5 million people had already cast a ballot before the debate's opening.

Collins said she hoped none would have "buyer's remorse", but, in truth, there was little in the debate likely to change anyone's mind.

In her final comments, Ardern made a direct appeal to long-time National supporters, to those who "have never voted for Labour before".

"Every vote for Labour is delivering strong and stable government - and that's what we need right now."

In contrast, Collins went after the 14 percent of voters who wouldn't reveal their preference and former supporters who'd strayed to the minor parties.

For the first half of the debate, both leaders seemed to be going through the motions after what has been a long and tiring campaign.

Not until the fourth and penultimate segment did the leaders jolt awake when Collins again suggested Labour would adopt the Green Party's wealth tax.

"I'm going to call you out on this," Ardern said. "It is a desperate political strategy to try and get votes and it is wrong.

"This is a blatant campaign of misinformation that I'm putting an end to."

Collins pushed back, pointing to the Greens' long list of "extremely expensive" policies which would need to be funded somehow.

"I would never stand here and blatantly call someone a liar, and that is unfortunately what Judith Collins is doing now," Ardern said.

"How many broken promises before we start to say this?" Collins shot back, listing Labour's failings on KiwiBuild and light rail.

The final word on the topic, though, went to Ardern: "This is a desperate tactic, and frankly, it's sad."

Much of what was canvassed over the hour-long show fell in well-worn territory, a challenge often encountered in the final debate of a campaign.

There were some fresh revelations. Ardern declared she would step down as leader if she lost the election. It seemed a fairly safe commitment to make.

In contrast, Collins insisted she would stay on in the role. Asked whether her former leader Simon Bridges would be doing a better job, she swiftly threw him under the bus, revealing National's internal polling dropped to the mid-20s under Bridges' watch post-Covid.

As the debate neared its end, Collins remarked that she preferred politics to be "entertaining".

"Otherwise people just turn off and they can't be bothered," Collins said.

The irony is, by then, much of the audience and voting public had likely already tuned out.