Tonight's political poll puts Labour on 46 percent and National on 31 percent with just one day until election day. Both are down 1 percent. 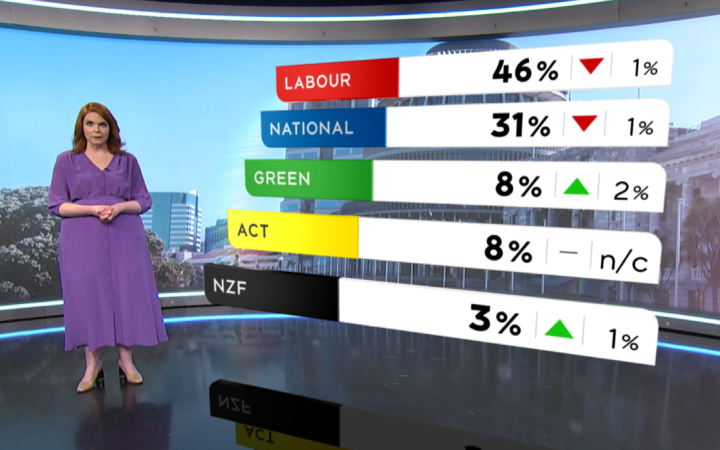 New Zealand First is up on 3 percent.

It would mean Labour would get 59 seats, 40 for National, 11 for the Greens and 10 for ACT. Labour would need the Green Party to form a government on these results.

In the preferred prime minister stakes, Jacinda Ardern is on 55 percent and Judith Collins is on 20 percent.

The poll was conducted by landline and mobile phone between 10-14 October.

What the commentators think

"I think people might be quite surprised they have gone to 46 percent."

"New Zealand First voters might be the sort of people who don't necessarily tell pollsters how they are going to vote, so I wouldn't say this is exactly how it's exactly going to play out on election night."

Coleman says polls have been incorrect in the past, but Cormack says this is best poll he has seen in a long time.

"We get out of the terrifying scenario of Labour governing alone. The Greens look well comfortable."

Coleman thinks Judith Collins has done an excellent job with the leadership of National.

"Judith has an opinion and many people will back her on that. She's had to make some calls, I think at times she's been let down by people on her team who should have backed her up. They should have at least stayed quiet because that's what do. You back the leader if you want to win."

Cormack is standing past his call that NZ First will be gone at the election. But Coleman says Winston Peters has surprised in the past and says there could be twists and turns before the election results are known.

The previous political poll - published by 1 News Colmar Brunton on 8 October - had support for Labour steady on 47 percent, National on 32, ACT on 8, the Greens on 6 and NZ First on 2.