The final leaders' debate before the election featured a confrontation that's been brewing for two weeks but ended with Jacinda Ardern and Judith Collins sharing the love. 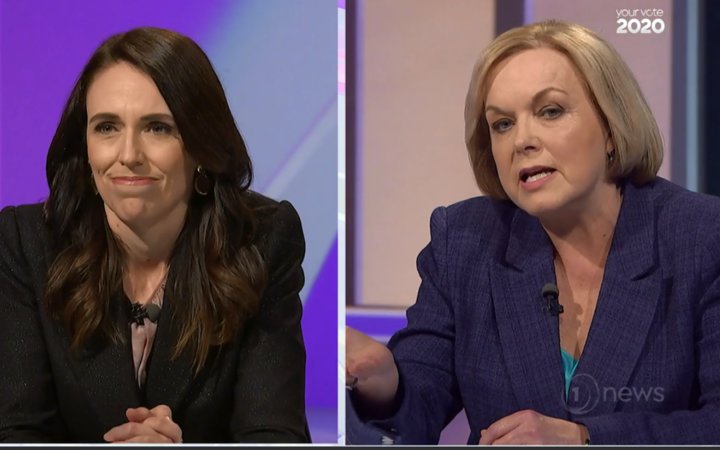 With two days left until voting closes, the National and Labour party leaders had a chance to make their final pitch to the public, with the attention on undecided voters.

The debate was held just after the latest political poll results were released, showing Labour on 46 percent and National on 31 percent. The Greens and ACT were on 8 percent each, and New Zealand First was on 3 percent.

On those figures, Labour would not be able to govern alone, and the Green Party's chances of being back in Parliament are looking safer.

Record numbers of advance votes have also been cast - the latest figures with results to the end of Wednesday, show 1,565,421 people had voted.

With just an hour long debate, no time was wasted - the first question to Ardern was this: "Do you promise, this time, to be transformational?"

Ardern believed the coalition had been.

"Change, real change, requires steps that bring people with us. If we want lasting change ... we need to try to build consensus so the progress we have made doesn't unravel."

She said she stood by her record, and used child poverty as an example - saying it took time to make change, and that she wasn't done yet.

But child poverty as a subject wasn't over yet.

Ardern was asked about her promise this week to halve child poverty by 2030 and challenged that it could be ended right now with money from the Covid Recovery Fund.

That money had to be kept as a contingency for the coronavirus, Ardern said.

The government's food in schools, benefit rate raise, minimum wage hikes were making a difference - and the government's own targets were being met, she said.

But there was more to be done. Ardern said she would not fix child poverty in three years, and would continue that work in another term in government.

Here, Collins was asked what her target for child poverty was.

Housing has been brought up at leaders debates already and, then, neither leader would say they wanted house prices to go down.

Today was no different. Would either bring in changes to reduce housing prices, they were asked.

Collins would "not say we will bring down the price of houses" but she'd target increasing the supply of housing via RMA reforms and mass consenting. "If you increase supply you will some drop in terms of pricing".

Ardern said homes were assets but not enough affordable homes have been built.

She didn't have an answer for how she would reduce house price, but identified that deposits were a barrier for buying. She touted progressive home ownership and home loan schemes from Labour as solutions.

Ardern said new solutions - like Māori solutions for Māori problems, as proposed by the Māori Party for issues like the justice systems, were needed.

She pitched a Whānau Ora programme to reduce child uplifts that had recently been established. "These are the kinds of initiatives that I hope will turn around those devastating statistics."

But she wasn't comfortable with such solutions as a separate justice solution. However, she said, "you do what you have to do".

A couple of good questions from this section included this: Will your faith play a role in your governance?

Collins said for her, it already does. "I try to be the best that I possibly can... I am a liberal Anglican. I have always been part of that."

Ardern said she did not subscribe to any religion. "I hope what people can see is I respect people no matter their belief, no matter their upbringing, because I had a similar start in my life."

With the Green Party and ACT on 8 percent, the pair were asked about coalitions.

Ardern yet again had to rule out implementing the Greens' wealth tax if a coalition was formed, despite the minor party saying they'd bring it to the negotiating table.

"I've made my view absolutely clear. New Zealanders deserve certainty on something as important as tax policy. Any suggestion that is counter to what I have stated time and time again is mischievious and frankly, desperate."

Collins repeated her claim that she believed Ardern would bring in the wealth tax, and that started the showdown that has been brewing during the campaign.

"Judith, I'm going to call you out on this. This has been happening for two weeks now. It is a desperate political strategy to try and get votes and it is wrong," Ardern told her opponent.

"This is a blatant campaign of misinformation that I am putting an end to. I have made my view absolutely clear and my intention absolutely clear. To imply otherwise is just wrong."

It was arguably the strongest moment of the debate.

Collins tried to get into the argument, but Ardern had control of the moment, challenging her about which of ACT's tax policies she would bring in in a coalition.

Collins claimed she wouldn't take Ardern's word because she had "time and time again" broken promises.

Ardern's interjection: "Politics of course is a place where you will have a lot of back and forth, but I would never stand her and blatantly call someone a liar. And that is unfortunately what Judith Collins is doing right now."

Back on a National-ACT coalition, Collins said there were plenty of things that they agreed on. She said she expected people to take her on her word.

Both were asked if they would work with Winston Peters if New Zealand First got into Parliament again.

It was a yes from Ardern, but Collins said her caucus did not want to "sell out to Winston Peters so much".

Even if he was the only option to work with, there was a lot worse than being in opposition, she said.

Ardern revealed she would not stick around as Labour leader if her party lost at the election. If they won though, she'd stick out the full term.

Collins said even if she lost, she'd stay on as leader as National because she was doing a "good job", and that she had the backing she needed to stay on.

A gentle touch to finish off the evening

The last couple of questions brought the two leaders together rather than generating debate.

They both got a laugh when Ardern said they'd been enjoying the debates.

And with a chance to tell each other one thing, Ardern thanked Collins for her post-15 March Christchurch terror attack speech.

Collins said anyone who was the prime minister had to put their heart and soul into, and that's what Ardern had done.

Beyond politics, Collins wanted to write another book - but that'd have to wait because she was busy. And Ardern wanted to see politics change, whether she was involved or not.

With that, it was time for a final pitch to the public.

Undecided voters came up - Collins had started the debate talking about them.

She said the undecided voters identified by polling - about 14 percent - would make their minds up on election day.

But this time it was Ardern, pitching to those undecided voters: "Some of you may be undecided, some of you may have never voted for Labour before. My message is for you. Every vote for Labour is delivering strong and stable government, and that's what we need right now".

Collins finished up saying in economic uncertainty, a decisive leader - her - was needed.

"Our plan is all focused on the economy. Growing the economy so that we can actually have jobs for our children and grandchildren, paying down debt ... it is really important that our children want to have a future ... party vote National for a big technology sector, an economy that is growing and infrastructure that works for you."