More than 1.15 million votes have been cast by early voters, with 453,426 voting over the weekend.

The Electoral Commission has released its latest statistics on voter numbers in the final weekend before the election.

With more than 700,000 votes cast before Saturday, the Commission said it was expecting numbers to top a million by this morning, a more than 50 percent increase on the last election in both the general and Māori electorates on 2017.

Those numbers appear to have been slightly underestimated with 453,426 votes over the weekend - more than 250,000 on Saturday alone.

The commission had predicted about 60 percent of voters would do so early this election, but those initial expectations now appear likely to fall short of the reality.

With just six days to go until election day, it seems a large proportion of the population has already decided.

Labour leader Jacinda Ardern says the high level of advance voting is positive, and shows New Zealanders are leaving nothing to chance for election day.

"I think it also does demonstrate that people are locking in their choices early this time and our hope is that they're locking it in with a plan around the future of New Zealand's recovery and a government that's stable and that's what Labour is offering."

She would not say whether she thought the Greens would benefit from Labour voters not wanting to see a single party in power.

"I'm obviously campaigning for a strong Labour mandate, for a strong recovery, and that's what I'll continue to do right up until polling day,"

National leader Judith Collins says she is not worried that the early voting would not favour her party.

She was asked how many votes from the first million she expected would be for National. 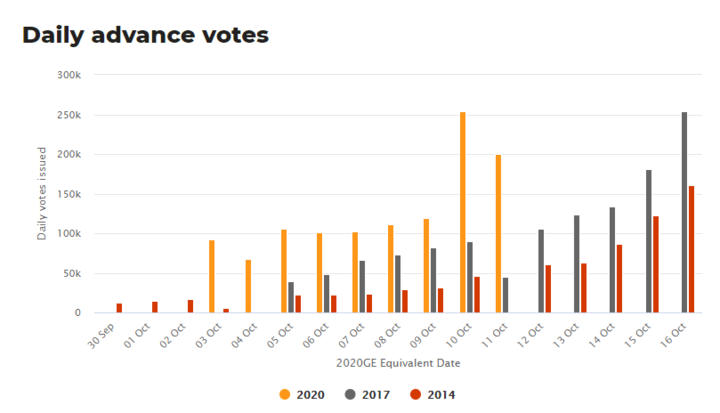