More than 165,000 people voted over the weekend - several party leaders among them - with votes on Saturday alone totalling more than the first two days combined in 2017. 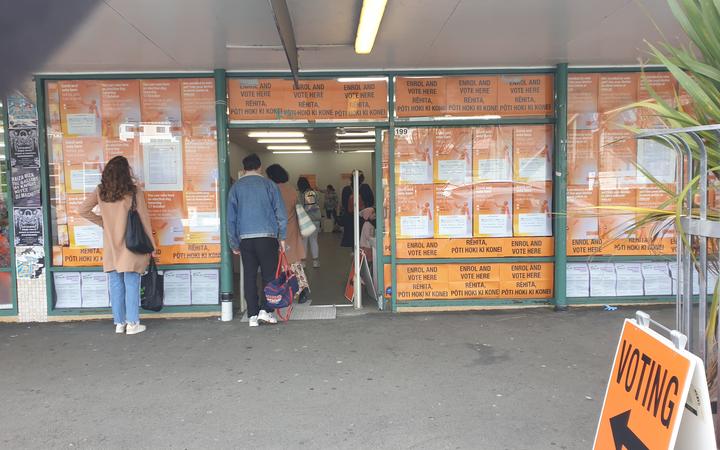 Advance voting has been increasingly popular in recent elections, accounting for 1,240,740 votes (47 percent of all votes) at the last election, and that is expected to rise to about 60 percent this year, partly driven by the threat of another lockdown. 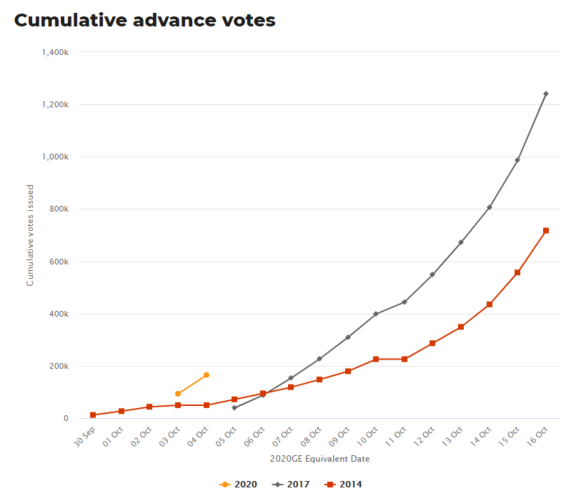 Polls opened on Saturday, and will be available for two weeks of voting until election day on 17 October.

The Electoral Commission has begun releasing its voting statistics showing 93,420 people voted on Saturday, and another 71,760 voted on Sunday - 165,180 combined - far outstripping the 39,570 and 48,238 of the first two days of voting at the previous election.

Most big policies from the two major parties in particular have been announced, so the remaining two weeks will be a race to the finish line.

Some of the first voters through the door were Labour leader Jacinda Ardern and Green Party co-leader James Shaw.

Ardern said she voted two ticks for Labour, but did not reveal her vote on the cannabis referendum.

"I've advance voted in the past, and the reason for me personally is just to signal to New Zealanders that the polls are open," she said. 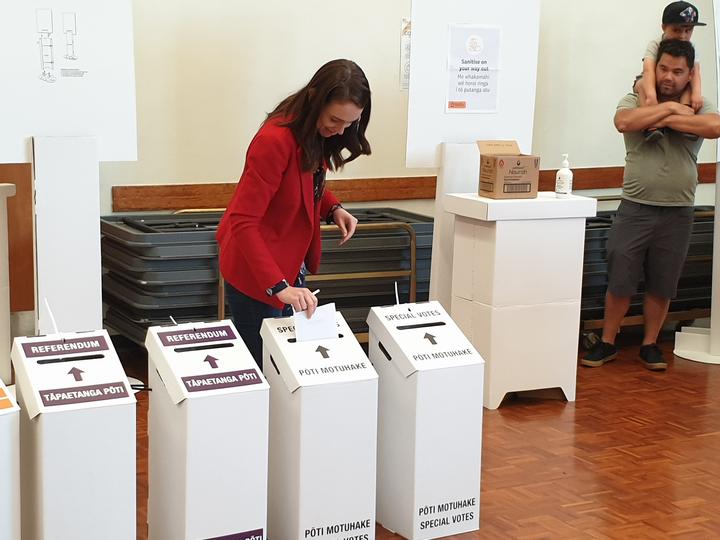 "What we really want to encourage this year is for people to vote early, it will reduce any potential congestion, it means that just in case if you're leaving it to the last minute you won't miss out on your opportunity to vote.

"It's just a matter of ensuring that people have a very simple experience at the voting booth."

Collins and her husband David Wong-Tung cast their advance votes at a polling station at St Thomas Church in Tāmaki on Sunday, ahead of the 17 October election.

Along with a "very easy" two ticks National, she also voted in favour of the End of Life Choice Bill and against the legislation of cannabis.

Collins, whose references to her religion have notably increased in recent weeks, readily took the priest's suggestion of a quick prayer beforehand.

With her party languishing behind Labour in recent polls she may be forgiven for beseeching an election miracle, but she kept the subject of her confab with the almighty close to the chest.

Perhaps she spies a risk - with the New Conservatives starting to feature in opinion polls - or an opportunity with 37 percent of New Zealanders identifying as Christian at the 2018 census. 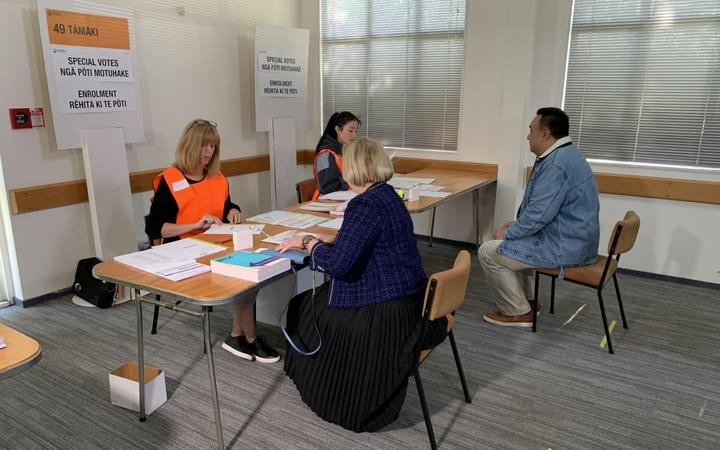 She denies drawing attention to her faith for political reasons however, saying it is "inherently part of who I am".

It was a surprise to New Zealand First leader Winston Peters, who said he did not know until recently that she was religious.

"But I'm glad she is. She's had a Damascus experience, clearly, but I'm pleased to see that because it might be in the future - as it wasn't in the past - reflected in her policies."

For his part, Peters will be keeping his vote old school - saving it until election day. The reason: policy surprises and secret agendas.

"There are some real clangers being dropped every day by political parties and so if you've already voted you can't change your mind," he says.

"You need to know all the facts ... we're 13 days away from an election and yet people are being encouraged by other leaders to go and vote now. Why? Because they don't want them to find out what the secret agenda might be in the next few days."

ACT leader David Seymour also voted yesterday, with the End of Life Choice referendum an emotional moment for him.

"This one's been a long, long way in the making for end of life choice, but I hope everyone's going to vote for compassion and choice.

"It's been a five-year journey to give New Zealanders compassion and choice. It's so real on that ballot box - I just hope that it goes through with a majority of New Zealanders too.

Greens co-leader James Shaw also took the plunge - at the ballot box early on Saturday, then diving in a Wellington marine reserve to highlight a two week old sanctuary policy.

He said people were getting increasingly used to the idea of voting in advance.

"My strong sense - as I travel around the country - is people have pretty much made up their minds," Shaw said.

He will be hoping his party's popularity will not also be taking a dive, and can stay afloat above the 5 percent threshold.

The government is expected to make a decision to move the city to alert level 1 on midnight Wednesday later today, and Davidson says some Aucklanders have been anxious to get their vote in early so they don't have to worry about the Covid-19 alert levels any more.

"I have heard that some people want to get it done to feel safe that they don't have to worry about it, I think some people are a bit worried about alert levels for Covid-19, " she says.

"People don't have to worry about that, that regardless everyone's vote will be counted and safe but I think that people do want to make sure they have their say, that's pleasing."

How, she says she understands some people want to get it out of the way and avoid any stress.

Provisional election results will be released on election night, but it will be another fortnight for the provisional results for the two referenda, and then another week for final results for everything on Friday 6 November.