Labour leader Jacinda Ardern and National leader Judith Collins have clashed in the first televised debate tonight. While Ardern shied away from a "bloodsport" mentality, Collins would have been happy to go for another hour. 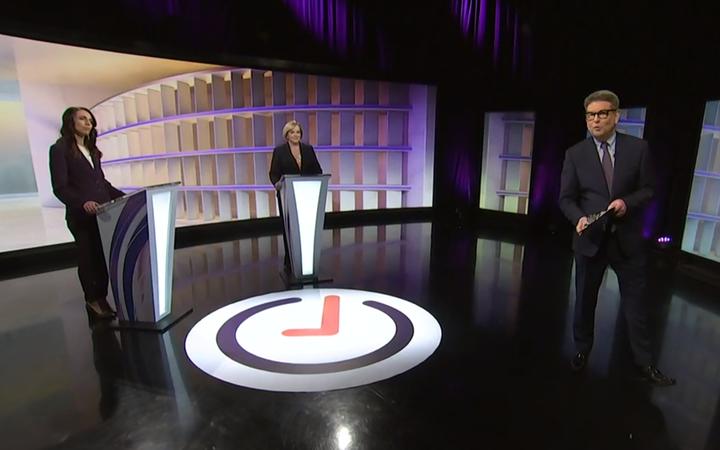 The debate on TVNZ, hosted by John Campbell, got under way after the release of the latest Colmar Brunton poll, which had both National and Labour losing percentage points to smaller parties.

Collins said the "second lockdown brought about by failure at the border" had stopped momentum for campaigning, but there were still a lot of people undecided and it was a good opportunity to fight on.

Ardern said, although the poll would allow Labour to govern alone, historically that has not been the case and she does not take anything for granted.

The kicked things off with Collins advocating growing the economy including education, health and the technology sector. Ardern said it was time now to invest in people, create jobs, look after the environment and back exporters.

They disagreed on several topics and, while Ardern got a bit heated when discussing child poverty, things remained largely civil.

Afterwards, Ardern said the purpose of the debate was to give voters an insight into their different plans.

"My view is that politics is not a bloodsport, it is a chance for people to see what our ambitions are, where we want to take New Zealand."

Asked if she was playing it safe she said people were "probably used to the way that I do politics ... I've never done the personal and I won't."

"I don't think that you can be in politics and allow other politicians to get under your skin.

Collins scoffed at that. "I actually really enjoyed myself tonight in fact I think I could do it again ... could've gone for another hour."

Ardern said Labour's plan was to start opening up to allow specialist skills back in. The party announced new visa changes and border exemptions today.

"Our border response has been successful ... the plan there needs to be very tightly managed and controlled."

She said elimination was still the strategy.

Ardern said the biggest difference in their plans was Labour used facilities managed by the government with army personnel, but Collins said that could not continue.

"We need to have somebody in charge."

Ardern said skills gaps need to be filled and gives the example of having partnered with the Kiwifruit industry.

"We have had incremental change over time."

Collins said that is not enough, with "horticulture specialists" - likely referring to seasonal employees from overseas - unable to get a foot in the door to get into the country.

David Smyth, a cardiologist from Christchurch, asked about the hospital in Canterbury where part of the hospital will not open due to lack of funds and funding for the health system.

Ardern said we need to "keep going with our investment", that there had not been a consistent pipeline for DHB infrastructure, and Labour wanted to look at the health sector as a whole.

Collins said the people of Canterbury don't care about that and "it needs to be sorted". Asked what she would do, she said she would send in her health spokesperson Dr Shane Reti to deal with it.

In some cases, debts at DHBs may have to be excused, Collins said.

Ardern said Labour's pipeline of infrastructure investment was the largest a New Zealand government had spent, including about $980m extra a year for DHBs, while National's health plan would spend less than $800m.

"I never anticipated announcing money for pipes, and electronics to keep the lifts operating."

Changing tack, Collins said the party was planning on $31bn spending for infrastructure.

Asked what they would be proud of passing on to their children, Ardern said bringing forward 100 percent renewable energy generation to 2030.

Collins said that was nonsense and Labour's plan was to spend $30m on a business case. She said the percentage of renewable energy generation has gone down under Ardern's government.

Ardern countered that was because of drought years, and part of Labour's plan was spending $70m to accelerate dry year storage such as pumped hydro generation at Lake Onslow.

Collins brought the focus back to transport, and her own party's electric vehicle policy.

Aorere College Head Girl Aigagalefili Fepulea'i-Tapua'i asked about education and what would happen to young people who left school in a time of greater unemployement because of Covid-19.

Collins said: "We've got to make sure that people have jobs that they can go to."

Ardern said now was the time to invest on those who are on the lowest wages, and Labour would do that by paying the living wage to contractors for the government.

Collins argued businesses could not afford constant increases in minimum wage, which she said would not happen under National, which is also proposing tax cuts.

Collins said minimum wage workers would also benefit, although "it's not enormous". Indeed, the cut comes to about $8.10 a week.

Ardern said she - and presumably people on high incomes like hers - should not get a tax cut. Collins quipped: "give it back then".

Ardern took the chance to promote the party's trades training policy and the party's work on "shovel ready" projects.

Collins said Labour was ignoring the tech sector, bringing attention to her own party's tech sector policy announced yesterday, saying it was a very high value sector and jobs were "already being created".

On inequality, Ardern said the government has been lifting the minimum wage.

"We need to keep rebuilding our state housing stock ... secondly we do need to address income inequality."

Collins said it does not matter what is promised by Ardern after KiwiBuild. She said reforming the RMA is "utterly crucial to planning" and getting houses built. Labour has also committed to reforming the RMA.

Ardern said there would be some families who could afford to buy a house but "we need more public housing ... we have created more than 5000 public housing places".

"We need to keep going but this is a housing crisis we can't turn around in three years."

Collins argued those 5000 houses were planned and consented under National. She said construction was stopped during the level 4 lockdown and asked why that was.

Ardern said she still believes in a capital gains tax but had committed to not introducing one, so she would not.

Collins would not say there was anything wrong with taxing capital gains on a second property, but implied it was a slippery slope to including gains in KiwiBuild and shares.

Host John Campbell asked Collins if she had a second property and how long she had owned it.

"I do, oh actually it's not, well it's [owned by] my trust but yeah, okay ... since I've been in Wellington basically, it's because I live there."

"We are not going to tax our way out of a recession ... we're going to grow our way out."

Ardern said the foreign buyer ban had made a difference, and raised the prospect of renters.

Collins said what worried her was the restrictions placed on landlords, and "by the way" a lot of the state houses were not healthy.

Ardern said Labour was spending hundreds of millions on retrofitting to make them healthy. Collins said she was "not worried" about healthy homes.

Collins said told her the party would "back you", she says they would "not bag you and not change anything you do".

Ardern said Labour had collaborated with farmers on sustainable food creation, climate change and water health. She pointed to the he waka eke noa partnership.

She said farmers saw the need to be competitive, and that meant a sustainable approach, but Collins said farmers' mental health was suffering because of the government's changes.

Collins also raised freshwater quality, saying targets needed to be reviewed, but would not commit to any specific changes.

Ardern said important investment needs to be made on separating drinking water and sewage.

Collins continued to challenge her and Ardern became more animated when speaking about child poverty, saying "I can't stand by and listen to this".

After the debate, Ardern said she was not getting frustrated.

"I'm quite passionate about that area so I of course wanted to give a slightly longer form answer.

Collins thought there was a different reason.

"I mean we've got 4100 more children in material hardship before Covid and foodbanks particularly in South Auckland even worse in terms of the numbers of people having to got to them in December last year."

Collins says the most important thing to her at the moment is the New Zealanders losing their jobs every day.

She said National wants to get started on fast tracking infrastructure projects.

Ardern said "we need a plan ... not just for the here and now but for the future".

She also focussed on infrastructure, including projects that can do "double duty" and create jobs while providing public goods like free school lunches and freshwater reform.

Collins said she wanted ACT's votes to help reform the RMA, but anyone who wants a National government should "vote National".

Closing statements: Collins spoke about the RMA and infrastructure. She said "vote for us because we're the people who get stuff done".

Ardern said "we have a plan" and spoke about the "challenges" New Zealand has faced. She said "let's keep moving".