The National Party wants to establish a Border Protection Agency to oversee and manage Covid-19 and any other public health threats at the border.

Collins has likened the agency to korowai, describing it as a cloak of protection. The agency would be called Te Korowai Whakamaru.

The announcement comes a day after the government bolstered Defence Force numbers at isolation and quarantine facilities.

It's also set up a new team of health advisers, after the Health Ministry failed to deliver a robust testing strategy at the pace required.

Collins says the current Covid-19 border approach was set up in an ad-hoc way and heightened border management will be required.

She says National wants international travellers to provide evidence of a negative Covid-19 test before entering the country.

It also wants those who work at the border and treat or test Covid-19 patients to carry compulsory contact tracing technology.

This would include the rapid deployment of bluetooth applications and things like a CovidCard.

The agency would report to a single minister whose focus will be keeping New Zealand free from the risks of Covid-19 and other pandemic threats.

It would also oversee the response from other agencies such as the Ministry of Health and district health boards, and be responsible for managing co-payment for the costs of managed isolation.

Collins says the government has dropped the ball on testing, tracing and managing people in isolation.

To prevent the virus coming through the border National wants international travellers to undergo pre-boarding thermal imaging and completion of a health declaration card.

It would also require another test of travellers within three days of arrival as well as a test on day 12.

Collins says New Zealand borders will be tough, but they will be smart.

"This is tough but tough times need tough measures." 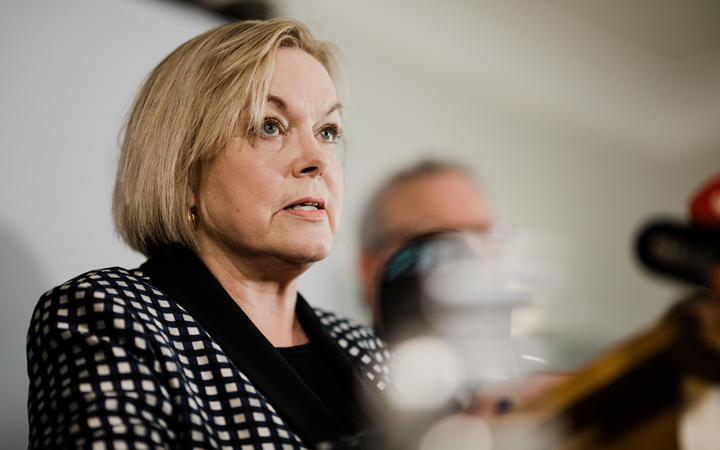 Targets would also be introduced for testing, with a plan to make waiting times for a Covid-19 test no longer than 60 minutes.

Aged care workers would be required to undergo regular testing and more opportunities would be created for wider testing within retirement homes.

Collins says the current response of putting various agencies in charge of different facets, "has led to a disorderly and confused response, putting the health and livelihoods of five million New Zealanders at risk".

"More than 1.6 million Aucklanders are locked down right now because the government dropped the ball on testing, tracing and managing people in isolation. It's not good enough."

Collins says if there's a need for a lockdown it would be based on what's necessary.

"We have a zero tolerance to Covid-19 being in our community."

National says returning New Zealanders would be blocked from entering the country if they returned a positive result in a new test everyone would have to have, three days before arriving here.

Under its new border policy, National would "require international travellers to provide evidence of a negative Covid-19 test before arriving in New Zealand".

Health spokesperson Shane Reti says a National government would "follow international models and require people coming into the country to not only quarantine but also test themselves for Covid-19 three days before departure, and provide the results of that test to airline staff before boarding their plane".

"If you have a positive test you won't be boarding a plane to New Zealand," he told reporters at the policy launch.

Asked if that would create legal problems by preventing citizens returning to their own country, Reti says they are "not prohibiting them from coming back, we're saying if you want to come back and you want New Zealand to be safe, then these are the regulations you'll need to respond to".

It's "very clear", says Collins, with the whole country under some level of restriction, "issues like this are always a balance and I would say New Zealanders would want us to keep Covid-19 out."

New Zealand has seen what happens when a "less rigorous approach is taken - we're not prepared to allow that to happen", she says. "This agency will be resourced to act as a centre of expertise. It will have the personnel, technology and capability to provide a world-class defence against Covid-19.

"Continuous improvement of our systems is required so that lockdowns become more targeted and effective, with minimal impact on our communities and the economy."