National Party leader Todd Muller has spoken about the controversy around the National MP who leaked Covid-19 patient details at a roading announcement this afternoon, saying Hamish Walker's exit from politics was "the only option".

Backbencher MP Hamish Walker last night admitted to leaking the personal details of the 18 active Covid-19 cases at that time to media.

Earlier today, Muller said he had accepted Hamish Walker's decision to withdraw his candidacy for the Southland seat and not stand at the upcoming election.

In an announcement on transport this afternoon, Muller said the board will be looking at installing a new National Party candidate for Southland in the coming days.

"This was the only option because as we have well traversed the events of the last few days have not reflected from my perspective the appropriate National Party behaviour and values.

"It's the right decision and I acknowledge that and now of course we seek to move on."

He said he would not talk through the advice Walker had received, which was in a letter between himself and Walker.

"And I'm on record a number of times now confirming that, and he's paid the ultimate price of doing that.

He said his MPs were clear around the expectations of them and they reflected a party with a "fine tradition of values, of achievement for this country and every one of us knows that we are there because at the last election well over a million people supported our cause and our view that the government is stronger when we're in control".

Muller said Walker did not give the party the details about his plan to release the data. He said it was well documented that his conversation with Walker took place around lunchtime on Monday, and that was the first time he had connected with anybody on the leadership team.

"Hamish Walker went behind my back and made his own judgement, and I'm sure that he is ruing it today.

"We have had one MP who made a serious error and has paid the ultimate price in terms of his political career. I think that talks to a party that does have high standards and when people breach them there is consequences.

"It was totally inappropriate for that personal information to be leaked to the media, because they are New Zealanders who are suffering because they have Covid and are in a constrained environment."

But he said National would continue to critique the government's "every day glitches" in the managed isolation programme.

"The government continues to demonstrate by the day actually that their border management is still not at the expectations that New Zealanders have of keeping us safe."

On the other hand, Prime Minister Jacinda Ardern said the public deserved and expected more.

"It may be an election year but we are in a global pandemic, we should not be spending our time on people using people's personal and private information as a weapon in politics, she said.

In his announcement on South Island transport, Muller said National will build the Christchurch to Ashburton Expressway, originally announced as one of 10 'roads of national significance' by National in August 2017.

He said building the four-lane expressway between Christchurch and Ashburton would begin in National's first term with construction likely to start after 2023, at a cost of $1.5 billion.

"The project will create important economic stimulus and jobs in the short term while also allowing Canterbury to maximise its future economic potential.

"It'll be 60km of four lane grade separation, the road we had promised to build as part of the roads of national significance, our second tranche of those - that this government cancelled, that they did not progress with."

He said National would be "straight into it" on the consenting, as well as design and construction.

"One hundred and 19 accidents, serious accidents in this area on that stretch of road over the last few years, I mean that impacts people's lives. Those new roads of national significance, they've only had one fatality across all of them. They're incredibly safe and that'll have a huge boost to job growth and activity in this region." 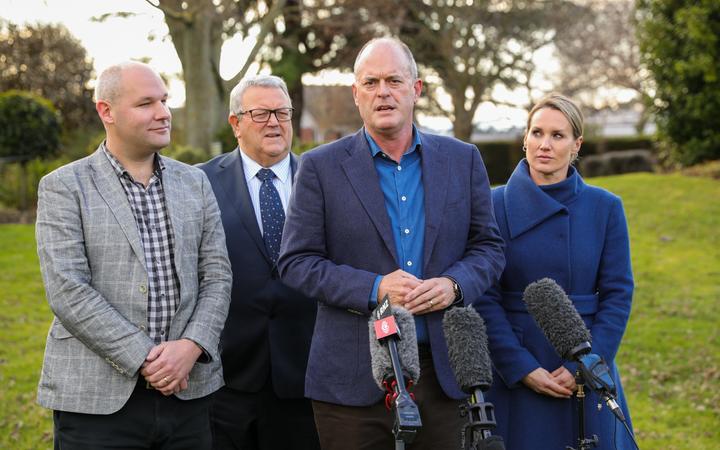