The Regional Economic Development Minister has blamed iwi sensitivities and Department of Conservation (DOC) red tape for the lack of progress on the $13.3 million Taranaki Crossing project. 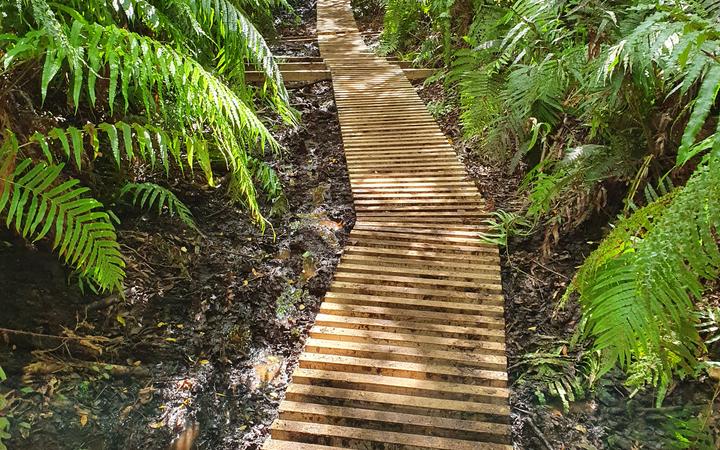 Last week, Shane Jones and Conservation Minister Eugenie Sage announced the completion of the first section of the upgraded walk Taranaki Crossing - 850 metres of boardwalk over a muddy section of the Mangorei track. Photo: Supplied

Ngāti Ruanui chief executive and Māori Party co-leader Debbie Ngarewa-Packer revealed last week she waited five months for a reply to an Official Information Act request seeking to find out how the money was being spent, and said she was still not clear on where it was going.

"We've always had concerns about how this project is rolling because it's been hard to get transparency and optics on some of it, and really we just wanted to know a little bit about the Provincial Growth Fund and a breakdown of the $13.3 million. Where it was going and how it was being managed, because there was such a lack of progress."

Ngarewa-Packer said an Official Information Act request was filed in September, but the iwi didn't get a reply until late February.

But Shane Jones said Taranaki iwi have by and large effected their settlements and money was available but the development of Taranaki Mounga was always going to be sluggish because of iwi concerns and DOC's requirement to reflect the needs of the general public.

The minister said he had learned from this project that the conservation estate was one of the most regulated that could ever be encountered.

"The difficulties, I'm told from a DOC perspective is that they have incredibly onerous OSH [occupational safety and health] requirements given the expectation there's going to be a heck of a lot more day visitors as opposed to a scattered number of trampers.

"And the other thing to bear in mind, and I can't even believe I'm saying this, a boardwalk through a swamp and a swing bridge is proving to be a lot more complicated than I would've thought.

"And I think my father's generation would have done this mahi completed a heck of a lot faster than we've seen in Taranaki, but it is not fair to say that the Provincial Growth Fund has been deliberately concealing information."

Jones wanted the "pace button turbo charged" to help attract domestic tourism to Taranaki as the province recovered from the Covid-19 crisis.

"I personally would've like to have seen it [the crossing] happen a lot quicker."

Jones could not say where the $3.4m pledged by the previous government to the Pouakai Crossing component of the project in 2017 had been spent.

"No, I don't have access... I presume I could hire some forensic accountants who would waste my time going to find that information out."

Shane Jones said he has been amazed how long a relatively modest project has taken. Photo: RNZ / Dom Thomas

In terms of the PGF's $13.3m contribution to the project, Jones said he still hoped the "Mounga ki Moana" concept linking the Taranaki Crossing to Te Ara a Ruhihiweratini would go ahead.

A combined mountain bike and walking trail from the regional gardens at Pukeiti to the ocean at Ōakura via the Kaitake Ranges, Te Ara a Ruhihiweratini, is being funded by the Taranaki Regional Council to the tune of $3.5m and project managed by the New Plymouth District Council.

To link Te Ara a Ruhihiweratini to the Taranaki Crossing would require a new track to be built between the Pouakai Ranges and Pukeiti. That has proven a sticking point and it is not currently funded as a part of the PGF investment.

"You are really raising an issue with me that I won't shy away from, mate. I've found the sensitivities, the Māori sensitivities, over a lot of things in Taranaki to be very deep and very time consuming.

Jones said being early off the mark had not been much of an advantage to the crossing.

"The Taranaki mounga project was one of the first that we announced. But for a year I couldn't even work out for myself what was being achieved and I have been quite amazed at how long a relatively modest project has taken."

So far, including contributions from the previous government, local authorities and the Transport Authority more than $23m has been set aside for the wider Taranaki Crossing project.

The New Plymouth and Taranaki Regional Council have now made an additional $13.6m bid for Covid-19 "shovel-ready" project funding for the Te Ara a Ruhihiweratini trail.

Last week Shane Jones and Conservation Minister Eugenie Sage announced the completion of the first section of the upgraded walk Taranaki Crossing - 850 metres of boardwalk over a muddy section of the Mangorei track.

Once complete it is hoped the Taranaki Crossing will increase visitor numbers to Taranaki by 35,000 to 40,000 by 2025 and boost the regional economy by $3.7m annually.