One of the most prominent voices during the Covid-19 crisis, Ayesha Verrall, has been given a high ranking on Labour's list. The Labour Party this afternoon unveiled its full line-up of candidates with the first 17 slots occupied by the party's Cabinet ministers and Speaker Trevor Mallard.

Dr Verrall, an infectious diseases specialist, is ranked next at number 18, meaning she is almost certain to make into Parliament after September's election.

Dr Verrall criticised the government's contact tracing programme before being brought in by the Health Ministry to review its work, but did interviews after submitting her nomination endorsing the government's actions in getting the system up to speed.

On 10 May, the eve of the decision to go to level 2, she told RNZ that while there was still work to do, she was confident that the system was ready for the country the move.

"The contact tracing system has improved so much over the last two months, I haven't seen a health system improve that fast ever," she said.

Speaking to reporters this afternoon, Dr Verrall said she had put her name forward to join the list on May 5 - the day before nominations closed.

"It was a scramble to put my nomination in in the week before," she said. "I was very busy in April."

"The problem here is that she was a commentator and then ultimately contracted to the Ministry of Health at a time when quite obviously she would've been considering, not having previously decided, that she'd be putting her nomination in by the closing date," Brownlee said.

Dr Verrall should have declared much sooner that she was putting her name forward to join Labour's election list, National said.

However, she rejected any suggestion of a conflict of interest in her role as a commentator or adviser.

"I have always sought for that work to be highly transparent," Dr Verrall said.

"The report that I've written has been made publicly available. It's been reviewed by other experts and, last week, I was asked to join the WHO in sharing it as an example of best practice."

Prime Minister Jacinda Ardern said Dr Verrall had acted with integrity in all interactons with the media since her nomination in early May.

Ardern told reporters there was no conflict.

"From all of the interviews that have been carried out and questions raised Dr Verrall has acted with the utmost integrity, been very quick to point out areas we needed to improve and we've sought to act on that..

All Dr Verrall's public comments were given in her role as a specialist in infectious diseases, Ardern said, and were often critical of what the government was doing.

Dr Verrall was ranked just one spot below the Minister of Health David Clark, who narrowly escaped being sacked for breaking lockdown rules under alert level 4.

Asked whether she hoped to be health minister, Dr Verrall said that was a decision for the prime minister.

"I'm determined to use my skills and experience in health to make sure New Zealanders get the best healthcare that they deserve in any capacity I can.

"I'm focussed on campaigning for the party vote for Labour in the next three months.

At the post-Cabinet briefing, Ardern was asked if Dr Verrall was her next Minister of Health.

"I'm making no absolutely comment on what the future Cabinet looks like - those are all decisions, should we be re-elected."

Clark was reprimanded and demoted in the Cabinet in April after he admitted driving 20km to take his family for a walk during the lockdown, but kept the health portfolio.

At the time, Ardern said under normal circumstances he would have been sacked, but didn't confirm if he would be fired once New Zealand was out of lockdown.

Today she defended Clark's overall performance, saying he was part of the leadership team that has ushered New Zealand through the last few months.

"Making decisions that have led thus far to New Zealand being in an incredible position and I do credit him with the role he has played in that," Ardern said.

"You're asking me whether his entire career should be determined by a mistake during that period, as opposed to the many, many significant decisions he made on behalf of New Zealand - my view is a little more emphasis on the outcome we have now experienced would be in order." 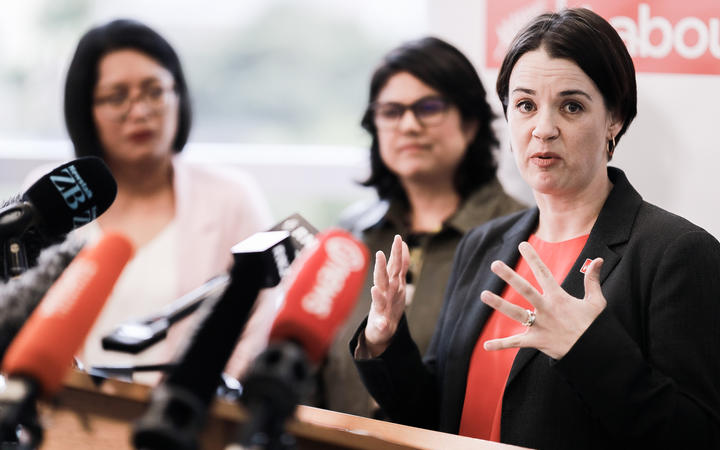 "And it's changed the minds of lots and lots of voters ... so it isn't unusual that somebody who has been working alongside and watching the government's health response has been inspired to join us."