The prime minister is heralding significant progress in the fight against online terrorism, with the Christchurch Call initiative that was signed one year ago today in Paris. 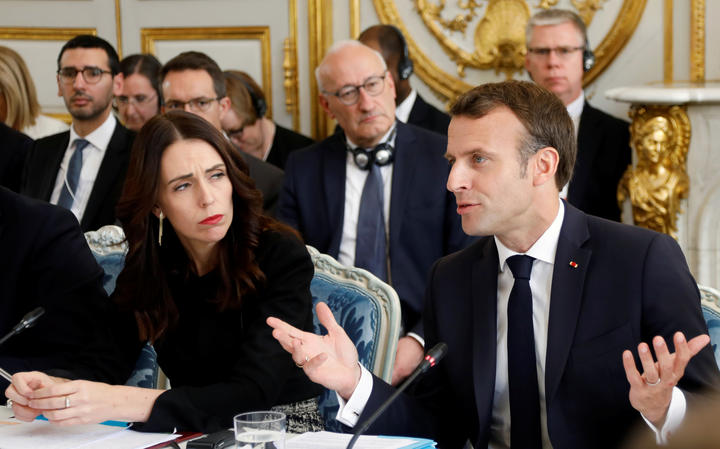 French President Emmanuel Macron and Prime Minister Jacinda Ardern attend a launching ceremony for the 'Christchurch Call' at the Elysee Palace in Paris, on May 15, 2019. Photo: Charles Platiau / Pool / AFP

Jacinda Ardern led the charge for a global commitment to eliminate terrorist and violent extremist content online in the wake of the 15 March attacks last year.

She said if a video similar to that of the mosque shootings occurred, a "network of governments and tech companies" would take action to stop it.

Now 48 countries and eight large tech companies, including Facebook, Google, Microsoft and Amazon, support the call and are working to implement its goals.

"Because of the Christchurch Call, we can coordinate internationally across governments and tech companies to stop terrorist and violent extremist attempts to weaponise the internet," Ardern said.

"I am proud of the advances we have made in the last year."

She and co-founder, French President Emmanuel Macron, have reaffirmed their commitment to the call.

"For one year, and for the first time, governments, major tech companies and civil society representatives have been working cooperatively together to stop and prevent attacks like the one we saw in Christchurch being broadcast and spread online," Ardern and Macron's joint statement said.

"Forty-eight countries, the European Commission, two international organisations, and eight tech companies are now actively contributing to the implementation of the Call commitments, together with an advisory network of 44 international civil society representatives, which include non-governmental organisations, academia, think-tanks and others who focus on human rights (including freedom of expression and digital rights), counter-radicalization, victim support and public policy."

It said this collaboration now had the ability to respond to attempts to use the internet as a terrorist weapon.

"Tech companies have reformed the Global Internet Forum to Counter Terrorism (GIFCT) into an independent organisation with dedicated resources, a 24/7 crisis management function, and an enhanced governance structure.

"A crisis response protocol has been adopted and already been used: in October 2019 and February of this year, the GIFCT companies demonstrated a far quicker and more efficient response to real-world attacks that had the potential to develop into online crises."

The leaders said while this was a start, there was more work to do.

Both countries are working to broaden support for the call this year, particularly within the tech industry.