The Health Ministry initially recommended New Zealand shut its borders completely - including to citizens and permanent residents - but this was rejected by Cabinet, the Foreign Minister has revealed today. 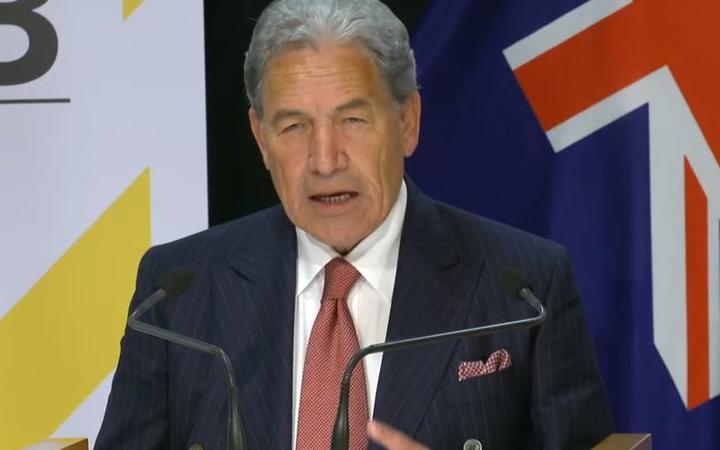 In a media conference early this afternoon, Winston Peters said health officials had strongly pushed for shutting the borders, even to New Zealanders, to prevent the spread of the coronavirus.

Peters said while this was "understandable and appropriate advice" from a health perspective, Cabinet ministers rejected that as it was "inconceivable that we [would] ever turn our backs on our own".

"We built from scratch managed isolation and quarantine systems to mitigate against the heightened health risk posed by returning New Zealanders. It was the right thing to do."

He said it was the Ministry of Foreign Affairs and Trade (MFAT) that convinced health officials to keep the border open to some in both directions, and the reason he brought this to the public's attention was because they deserved to be thanked.

"Thanks for the chance to put on the record a salutation and appreciation of MFAT. It's very common to criticise civil servants but when they step up and perform in the way they did, they deserve every taxpayer's appreciation."

Speaking at a later media conference, Prime Minister Jacinda Ardern said the idea of shutting the border to NZers was never entertained and defended the Ministry's advice, saying it was their job to ensure the safety of the New Zealand public.

"And our almost 60 Ambassadors, High Commissioners and Consuls-General around the world have as their number one task leading their teams to help our citizens stranded offshore," he said.

Peters said New Zealand's embassies had been working on the most complex consular response they had ever attempted, with just 700 consular requests in three months last year increasing to more than 11,000 this year.

About 80,000 New Zealanders had travelled home since 14 March, he said, thousands of whom were assisted in returning by MFAT.

Another 45,000 foreign nationals left New Zealand during the level 4 lockdown, he said.

Peters said this "managed exit" of stranded foreign nationals was another "complex" decision.

"The domestic movement of thousands of people risked our national health goals.

"But one of the underpinnings of relations between nations is reciprocity. That is, we expect other countries to help return our people to New Zealand - so it would be wrong and dangerous to prevent foreign nationals from leaving here."

As a result he said Cabinet "rightly decided, despite advice raising risks about the potential negative health consequences of such a decision, we needed to safely manage the exit of foreign nationals".

He said today offered an opportunity to explain the foreign policy dimension to choices the government has made in its Covid-19 response.

"One criticism is that we should have closed our border sooner, that we did too little too late. Another criticism was that the government's response has been too myopic and captured by advice from the Ministry of Health. Both critiques could not be further from the truth."

He said New Zealand was extremely unusual in closing its borders to foreigners and in implementing a lockdown before a single death.

He said NZ was faster than other countries to:

Peters has also released a list of the Foreign Ministers and Prime Ministers he's spoken to during the Covid crisis.

There are 23 countries including the United States, Australia, China, the United Kingdom and a range of other from Europe, South America, Asia and the Pacific.

"No single country has a monopoly on wisdom and we can make New Zealanders safer by learning from the experience of others," said Peters.

He said the response had been a massive task for the Ministry of Foreign Affairs and Trade, describing it as its "largest and most important consular operation in its storied 77-year history".

"It is also the most complex consular response a New Zealand government has ever attempted - because rules around lockdowns, border crossings, transits and flight links were and are changing every minute of every day," said Peters.

He said further work was being done with great speed on how to help our regional neighbours in the Pacific and elsewhere overseas.

The support for Pacific countries already offered, and that being planned, was essential.

"Our very future and the future of New Zealanders yet unborn depends on it," he said.