The government says a "triage" rescue package for commercial media will be announced within the next week - focusing on immediate needs to help them survive the Covid-19 crisis. 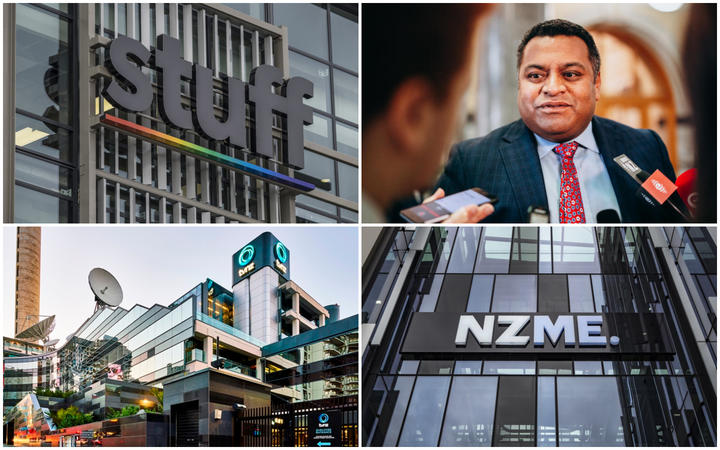 NZME cut 200 jobs as a result of the downturn in revenue. Photo: RNZ / Supplied

Bleeding revenue and having to shed staff, media organisations today pleaded for support and for the government to stop advertising on Facebook and Google.

Yesterday NZME cut 200 jobs as a result of the downturn in revenue, and magazine publisher Bauer Media closed two weeks ago, with the loss of another 237 jobs.

Media commentator Gavin Ellis warned that, with no certain end in sight, the entire industry was on its knees.

"I don't think there's anymore graphic illustration of the dire situation in which the New Zealand media find themselves in the crisis, and I fear those job losses won't be the last", he said.

Ellis told MPs today this was an "existential crisis" and it was not that commercial media was too big to fail - it was just too important to.

"Without some help there's no guarantee that that over-arching will survive in a form that's suitable for a free and democratic country like our own," he said.

Some of that help could come in the form of the government's advertising dollar.

"Spend the money to support the businesses that pay the taxes that employ New Zealanders", he said.

"The spread of that kind of fake news is being enabled and funded by the institutions and businesses that advertise on those platforms, and the government included there.

"But it's the news media that is devoting its resources, through its journalism, to exposing those", she said.

But Prime Minister Jacinda Ardern said the government needed to advertise where people are.

She said fake news was all the more reason to get messages out on these platforms.

"We are behaving in the same way that many private enterprises are. There is advertising on those social media platforms, that has not been at the expense of advertising in those traditional platforms", she said.

Broadcasting Minister Kris Faafoi said the government was working on a support package to help meet some immediate needs.

While no decisions have been made, he hoped to announce this within the week.

"Transmission costs, government advertising being brought forward are some of the discussions we've been having with those media entities that certainly from the feedback we've been getting from directly from them assist in the short-term to give them some certainty and cash-flow" he said.

But the media landscape was treading water well before Covid-19 - and Faafoi said this package will just be the first tranche, with work on a broader package to shore up the industry still to come.

"We've maintained for a long time that plurality is very important, which is why we are working on that short-term package, and the long-term package, which I think we need to make sure we can sustain journalism in the long-term", Faafoi said.

Consolidation of media was a big focus of today's submissions, with calls for the government to fast track plans to merge RNZ and TVNZ and for NZME to be allowed to buy Stuff - a move previously blocked by the Commerce Commission.

"We believe that that would lead to a very sustainable, ongoing business that will continue to hire a good, strong percentage of journalists throughout New Zealand", he said.

"The status quo is broken, I think we heard that very persuasively from my colleagues today. So the future is going to look different, we need to be open minded about that and we will need to innovate," he said.

"Our belief is that we shouldn't be looking to do this in the middle of the crisis, we should be buying ourselves time to work through it in an appropriate manner," he said.

Ardern said the government was working very closely with media bosses, and she expected the second tranche of support measures would be announced in the coming weeks.