Prime Minister Jacinda Ardern has announced $2 million in funding to put towards the relocation of Fijian communities displaced by climate change. 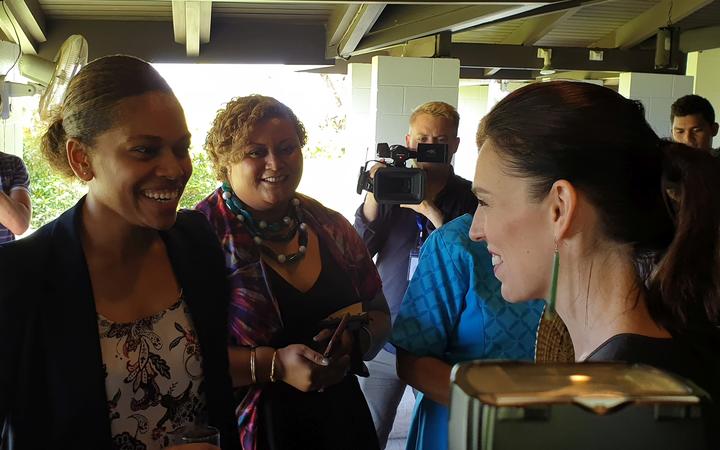 Prime Minister Jacinda Ardern at an event at the University of the South Pacific in Suva. Photo: RNZ / Jo Moir

The government funding comes from the $150 million package for Pacific-focused climate change projects announced by Jacinda Ardern at the Pacific Islands Forum in Tuvalu last year.

In a speech highlighting the values of globalisation and international cooperation, Ardern made the announcement at the University of the South Pacific this evening.

"Climate change continues to have a significant impact on the people of the region, as coasts erode, sea levels rise, and fish stocks move. I know this is not hypothetical here, but a reality as it is in the places I have seen with my own eyes - Tuvalu, Tokelau, Samoa," she said.

"The artificial lines between what we call domestic policy and international policy are just that - artificial. When we're trying to address issues such as climate change, or infectious diseases, or trans-national crime, borders do not matter - these are borderless challenges and they demand a collective response.

"Today, I am pleased to announce that New Zealand is making under this programme a $2 million dedicated investment in supporting Fiji to manage one of the most confronting issues that climate change has already brought - the displacement of communities.

"We are contributing to the establishment of Fiji's Climate Relocation and Displaced Peoples Trust Fund for Communities and Infrastructure, launched in September - a world first initiative that aims to sustainably and sensitively manage the relocation of Fiji's communities." 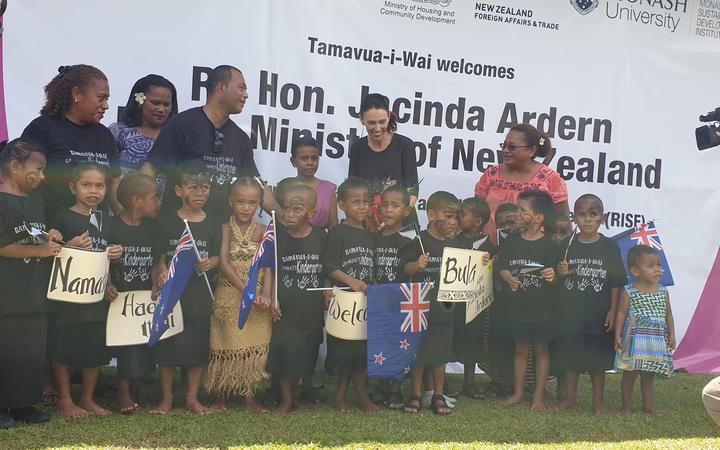 Prime Minister Jacinda Ardern at an event at the University of the South Pacific in Suva. Photo: RNZ / Jo Moir

Five communities have already been moved and a further 42 have applied for government support to move.

New Zealand is the first country to contribute to the fund, after a request from Fijian Prime Minister Frank Bainimarama.

Ardern said $98m had already been approved for projects under the package, which was part of a wider commitment to invest at least $300m globally in climate-related assistance in the next three years.

It was hoped the funding would give confidence to other countries to contribute also.

"Fiji is on the front line of the battle against climate change,'' Ardern said.

"It's important we support those who contributed the least to rising sea levels and extreme weather but who are experiencing it the most, resettle their communities in safer places.

"This is a reality we have a collective responsibility to manage and support."

The Fiji Trust Fund is a world-first designed to "sustainably and sensitively manage" the relocation of Fiji's communities.

Ardern is in Fiji for the first official visit by a Prime Minister to the country since 2016.

Ardern today visited a settlement in Suva where Australian and New Zealand funding is helping improve sanitation and water supply.

She said Fiji had a different measure of poverty, and New Zealanders appreciated that a small amount of money could make a big difference in the Pacific.

"With the small contribution we've made here, we're making sure that people have toilets, that they can protect themselves from flooding that could wipe their villages out."

Earlier, she hosted a lunch with women MPs, youth leaders and women in business and civil society roles in Fiji.

She said New Zealand was not free of the problems that come from gender inequality.

She told a group of Fijian women leaders that while New Zealand had female Prime Ministers, Governors-General and Chief Justices there was still work to be done and barriers to be broken down.

Ardern was put on a stage at the RISE informal settlement event, but following her speech and saying she preferred to sit with her friends - the Fijian people - she joined the women on the floor after her speech.