The government is expected to unveil a long term investment plan for sustainable tourism early this year using funding for a new tourist tax. 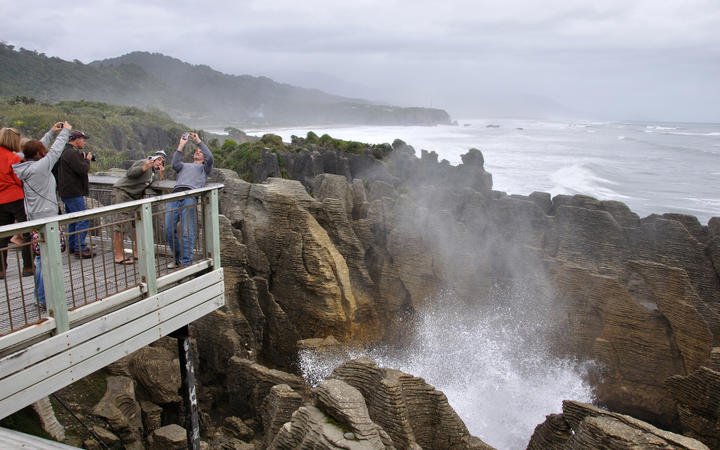 Tourists at the Punakaiki Pancake Rocks on the West Coast. Photo: 123RF

The International Visitor Conservation and Tourism Levy has collected more than $36 million since it was introduced in July 2019.

Most international visitors entering New Zealand are now charged a levy of $35 that's split between tourism and conservation projects.

The levy came under scrutiny late last year from the National Party's West Coast spokesperson, Maureen Pugh, who said her region had been overlooked, and she'd received confirmation from Tourism Minister Kelvin Davis that no West Coast tourism projects had been funded by the levy.

Her comments followed a written parliamentary question she asked the Minister about what specific infrastructure projects had been funded.

A spokesperson for Kelvin Davis said it was incorrect that the West Coast hadn't received any support from the levy, but funding wasn't earmarked for infrastructure such as roading, water or power.

About $3.9 million of the levy was invested into Westland tourism initiatives in August 2019, including walking and cycling trails, they said.

The spokesperson said the Minister wanted West Coast residents to know the facts and that the levy was investing in the region.

At the time the minister said the funding package would help support the Fox River area following the Department of Conservation's decision not to reopen the access road to Te Moeka o Tuawe/the Fox River valley.

The levy works alongside the Tourism Infrastructure Fund and Responsible Camping Fund.

It is expected to raise more than $450 million over the first five years to be split between conservation and tourism.

Pugh said severe weather events over the past year hit some West Coast businesses harder than others, so they needed strong support,

In December, hundreds of tourists were stranded in Franz Josef for two days after heavy rain caused slips and washouts along State Highway 6.