Labour's 'significant' infrastructure plans aim to shore up previous investment deficit and make use of low interest rates, not a sign of a slow economy, Finance Minister Grant Robertson says. 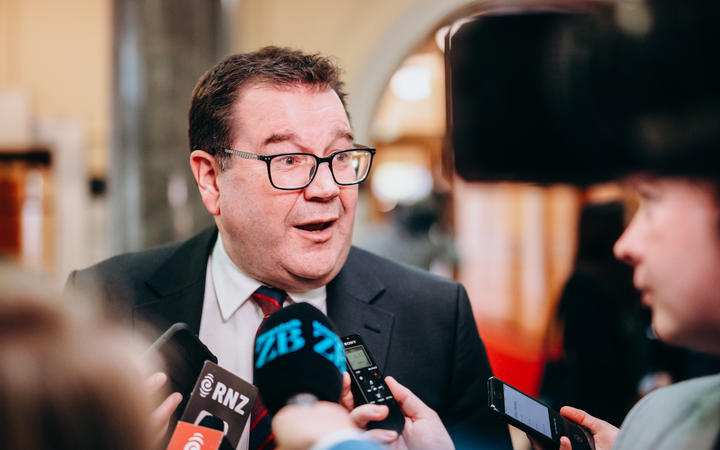 Prime Minister Jacinda Ardern announced at the party's annual conference over the weekend that state schools would receive $400 million for maintenance, the first sign of investment Mr Robertson had signalled along with greater borrowing, the day before.

Mr Robertson said during his speech on Saturday that Cabinet had committed to a boost to infrastructure as part of the short to medium term spending plan.

He said it made sense to take advantage of low government debt and the very low cost of borrowing, with interest rates at 1.3 percent for 10 years compared to 3 percent when Labour came into office.

The National party has argued the government is breaking another promise, saying the party was throwing out its fiscal responsibility rules.

"The government doesn't need to borrow more money if they just stopped wasting the taxes they are already collecting at a time when Kiwi households are finding it harder and harder to make ends meet. You know, Grant Robertson is throwing in the towel and saying he's going to ramp up debt," the party's economic development spokesperson, Todd McClay, said.

National leader Simon Bridges also questioned whether Labour would be able to deliver, claiming it had failed to do so with KiwiBuild and light rail.

"For all the hype around it at the Labour Party conference, it's actually less money than Labour's wasted on working groups and committees so far in this government, and supposedly though they're going to have to borrow for it and break their debt responsibility rules, which isn't on."

Mr Robertson told Morning Report today however, the spending was not an acknowledgement the New Zealand economy was underperforming.

"What it is, is an acknowledgement that we're in a particular part of the global economic cycle where we are seeing a slowdown across the world. New Zealand isn't unaffected by that but it's also the smart time to do this, I mean we have record low interest rates, we're in a position where we have been very careful with the government's finances so we are able now to respond to the changing economic circumstances.

He said further investments would cover transport and other infrastructure.

"We want to do this because we believe it is the right time to do it, because there is a deficit to address and because as a country we've been very careful with our finances so when the economic cycle reaches this point we're in a position to do exactly that."

He denied the government had cancelled road funding across the country.

"We didn't inherit a lot of roads already funded, we inherited a whole lot of empty promises from the previous government," he said.

"We'll now go through and look at those but there'll be a balance of projects."

The government might be keeping its cards close to its chest - but Paul Blair from Infrastructure New Zealand had a few ideas about where the money could be going, and seemed to agree that such investment was a good move.

"There's no shortage of things to spend on out there. If you look at housing, at transport, and at the water sector, the urban water sector, that's even before you get into climate resilience and investment.

"What we all know is that there is a significant infrastructure deficit and we also know that our production is poor compared to other countries so we've got to invest."

He said it was a difficult job for the finance minister to balance investment during upswings and downturns in the economy, but said it appeared to be a good time now.

"We'd love to see those three areas of housing, transport and urban watercare get a big bump. But we also think there's a real opportunity for our government to invest in partnership with our local councils. They're really struggling."

There were several roading projects ready to go which he said could be progressed relatively quickly.

"There's certainly a large number of ... road projects that are left over that are consented and ready to go. It's a little bit difficult for the government philosophically I suppose in that space but we'd strongly support roads and public transport investment.

"The government policy statement really swung towards rail - which we fully support, but the complexity of getting that up and running means that there is a big hole in the pipeline. We've got roading specialists who are there, ready to go, with consents. We'd just love the money to do it."

He said when it came to roading, Penlink, Mill Road, Grenada in Wellington, Katikati in Bay of Plenty and extra lanes north of Auckland were possible priority areas.