A story that is still being written has been the theme of speakers on the second day of the Labour Party's annual conference in Whanganui. 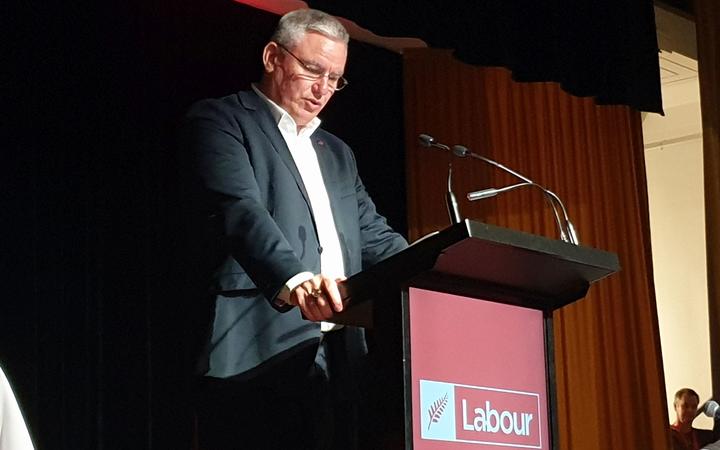 Deputy leader Kelvin Davis entertained the crowd with a light-hearted Māori legend-styled speech on the coalition's two years in government.

He took a swipe at National, describing them as a "terrible blue darkness" and "taniwhas".

"Different groups tried every three years to bring light to the world but alone, they weren't strong enough against the dark blue nothingness.

"Until 2017, when Whaea Jacinda, Winitana Peters, and the Kākārikis joined forces pushing apart the darkness to let the light in," he said.

"I, Māui, will take up this tremendous challenge, I will catch a $1 billion fish every year for three years and distribute amongst the regions so that people can prosper," he said.

Mr Davis' story touched on some of the coalition's key policies and achievements, including reducing prison numbers, addressing climate change, and education reforms, and described the government as having done "heaps".

He told the crowd that the story is still being written, and asked Labour members to help ensure it continues.

"What happens next, the twists and turns, the fate of its characters will be up to you.

"Members of our party - help us write the next chapter of our story, pick a path that sees good triumph over taniwhas," Mr Davis said.

Council of Trade Union president Richard Wagstaff said the government had made a great start on transforming workers' conditions and pay piece by piece.

"If you think it's all talk, if you think bread and butter hard facts, if you want hard data, then I invite you to take a look at some of the bottom line figures coming out on the wages and salaries front alone.

"Wages are now increasing by an average of 4.2 percent a year, the fastest growth in 10 years. Unemployment has fallen to the lowest rate in 10 years - that number 10 years again," he said.

However, Mr Wagstaff said there is still a lot of work to be done.

"We need to bring Fair Pay Agreements forward, we urgently need to establish minimum standards across industries to stop the race to the bottom.

"We also need to keep our foot to the pedal on pay equity, keep rolling out more settlements and pass new law," he said.