About 20 motorcycles rode onto the Parliament forecourt this afternoon, in an event marking White Ribbon Day. 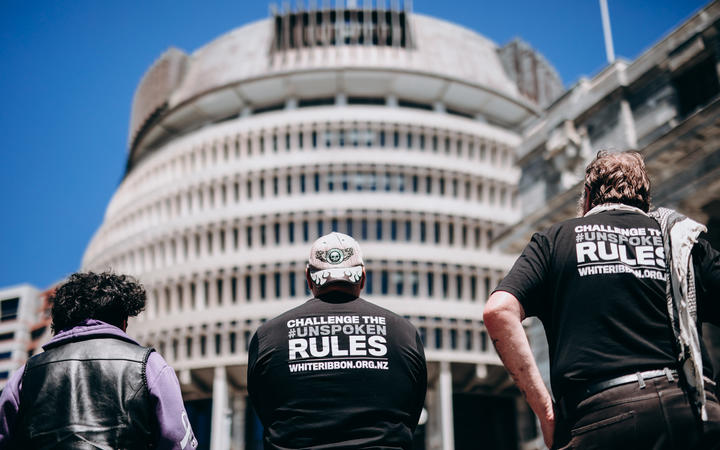 Over the past week the White Ribbon Riders have driven across the country, in an effort to raise awareness about the country's crippling domestic violence record.

This year's theme - Challenge the Unspoken Rules - has been focused on disrupting the toxic stereotypes that teach young men to toughen up and suppress their feelings.

Speakers noted the poignancy of shining a light on violence against women, in the wake of events like the Grace Millane murder trial.

"It had been a sad week for us this week," Deputy Police Commissioner Wally Haumaha told the gathering, "when we think of some of the high level incidents that have taken place."

The loud clarion call about violence towards women and children in New Zealand had become almost deafening over the years, he said, but there was still a long way to go.

The regularity of family harm incidents - with police attending one every four minutes - was a "sad indictment", he said.

"It's a sad indictment one in three women across the country will experience some form of family harm... that 14 women are killed each year."

White Ribbon Trust Patron, and former Principal Family Court Judge, Peter Boshier told the small crowd there was a dark underbelly in this country, one that had yet to be acknowledged.

"The terrible incidents of domestic violence in this country, which in the Family Court I saw time and time orchestrated by men against women."

Rider spokesperson Takurua Tawera said traditional notions of what it was to be a man were toxic.

"The old mindsets and traditions of being staunch, 'boys don't cry', 'I'm the man' - and the type of environments that coach young boys to be dominant, and then they toughen up".

Men needed to engage with their emotions, he said, to know it was okay to be sad, or angry, and to know how to manage those feelings.

Respectfully I decline your invitation to this relationship,

You see you remind me of my father,

Even though your hair is a soft brunette and your shoulders are not sharp,

I still saw him in you.

I didn't realise you were drowning me,

You see drowning is only drowning when you notice you can't breathe and I did not.

Swimming in waters of 'where are you?' texts, and threats you assured me were only jokes,

I had no idea you were already at the back of my throat,

And now you're in my lungs, ripping through the tissue and carelessly scratching your initials on my heart.