New Zealand First MP Clayton Mitchell is demanding an apology from security guards who booted him out of a Tauranga bar on Saturday night, describing them as politically-motivated "buffoons". 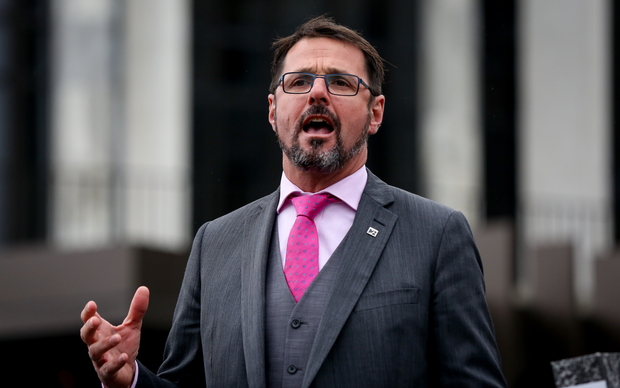 Speaking to reporters at Parliament, Mr Mitchell pushed back against allegations he and his friend had behaved badly at Brew Co, strongly denying claims he had accidentally hit a female staff member on the head with a glass and spilled his drink on her.

RNZ has made attempts to contact the owner of the Tauranga bar and the main staff member involved for comment.

Mr Mitchell said security made a "ridiculous" request that he move and then "over-reacted" when he tried to contact the establishment's owner.

"There was plenty of room for staff to get in behind us... I was actually on the phone to the owner at the time while trying to resolve this issue when I was grabbed quite forcefully by these buffoons.

"There was no fighting. We were just trying to go out quietly and calmly. But there was a bit of a kerfuffle and I would say a huge overreaction on the behalf of security."

Asked whether he would apologise for his actions, Mr Mitchell said: "Absolutely not. I would be expecting an apology [for] the behaviour of the security."

The Tauranga-based MP also rejected claims that he or his friend had replied, "we are the law," when it was suggested police could be called.

"It's politically motivated. We know the Young Nats are in behind, trying to stir something up here."

In a brief statement, the National Party's youth wing president Sam Stead said the issue had nothing to do with them.

"The Young Nats wouldn't waste their time on an MP they've never heard of."

Standing alongside Mr Mitchell, Mr Peters encouraged reporters to watch video footage of the night before jumping to conclusions.

"We are so happy for you to see it that we ask you to turn up on Saturday night, have a good hard look at it, and then tell the public what you think," Mr Peters told media.

"It will show that your concerns and your alarmism is not justified in any way shape or form."

Mr Peters said he had not watched the video himself, but had been informed of its content by a person he trusted.

RNZ has sought comment from the owner of Brew Co, Matt Hayward.