Speed dating was given a political twist in Dunedin yesterday with the city's youth putting mayoral candidates through their paces. 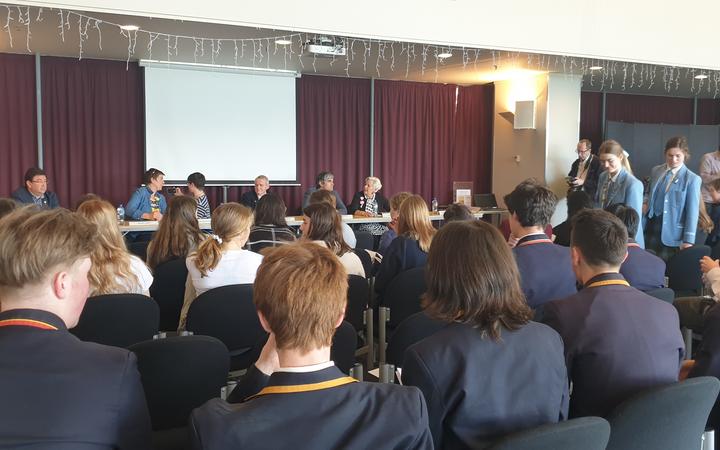 Historically young people are the least likely to vote in local government elections.

But the speed dating organisers said they hope young people will find youth and voting is actually a perfect match.

Patrick Wilson-Stewart, 17, hoped to see some fresh - and young - blood leading the council.

Christian Avis, 17, said he wanted the new representatives to preserve the city for the future.

"There's quite a divide between students and younger people, and the council itself, and getting our issues across to the council and mayoral candidates," he said.

"We're the ones who are going to be living in it."

With 14 candidates vying for the top job in Dunedin, they were split into two mayoral panels before speed dating began.

More than 50 students asked mayoral hopefuls about their policy, accomplishments - and increasingly, what they think about climate change as first time candidate Finn Campbell found out.

He was asked what he was doing about climate change.

"I'm a climate change only candidate so I'm running for council because I got sick of kind-of sitting outside asking council to do the right thing so I want to sit at the table and actually do it myself," Mr Campbell said.

At 24-years-old Scout Barbour-Evans is the youngest mayoral candidate, and is a firm believer the council needs to give youth more of a voice.

"It's not just about talking to young people sometimes, it's also about making sure we sit around the table. Nothing about us without us so if we're not around that decision making table than every decision is disingenuous because it is not actually actively including us in democracy," they said.

The Dunedin Youth Council organised speed dating with hopes it will get more young people voting.

"I think it's proven that every single vote counts, like your vote can literally make the difference between a councillor being in council and changing how Dunedin is for the next three years," Ms Bonilla Casanas said.

"Every single vote, no matter whether you're 18, 40, 70, your vote counts equally, your voice is heard just as much."

While Sasha Freeman, year 12, is too young to vote in the upcoming election, she said speed dating was giving young people a direct link to those in charge.

"Some people here are 17 and they won't be able to vote, but I think it's still so important to know who's running your city and there are other ways you can have your say other than have a vote," she said.

"The reason why we've got thousands of young people marching in the streets is because they are frustrated that the things that seem so obvious to them haven't been taken seriously enough by people who are in the position to do something about it," he said.

"That's our responsibility to take that challenge on for them and for the people who come after them in this community."

Another candidate, Richard Seager, said inaction was not an option as young people were facing climate change as part of their future.

"They're looking at a future which is a lot less secure than the future we looked at when we were their own age and they're also looking at a lack of willpower to have done anything about it for the last 30 or 40 years," Mr Seager said.

And candidate Carmen Houlahan said climate change appeared to be encouraging more young people to fill out a ballot.

"I didn't see this last time and I think it's one of the reasons why it's happening and particularly at university ... we've noticed a big change, like a lot of students are interested in what the local government politicians are offering," she said.